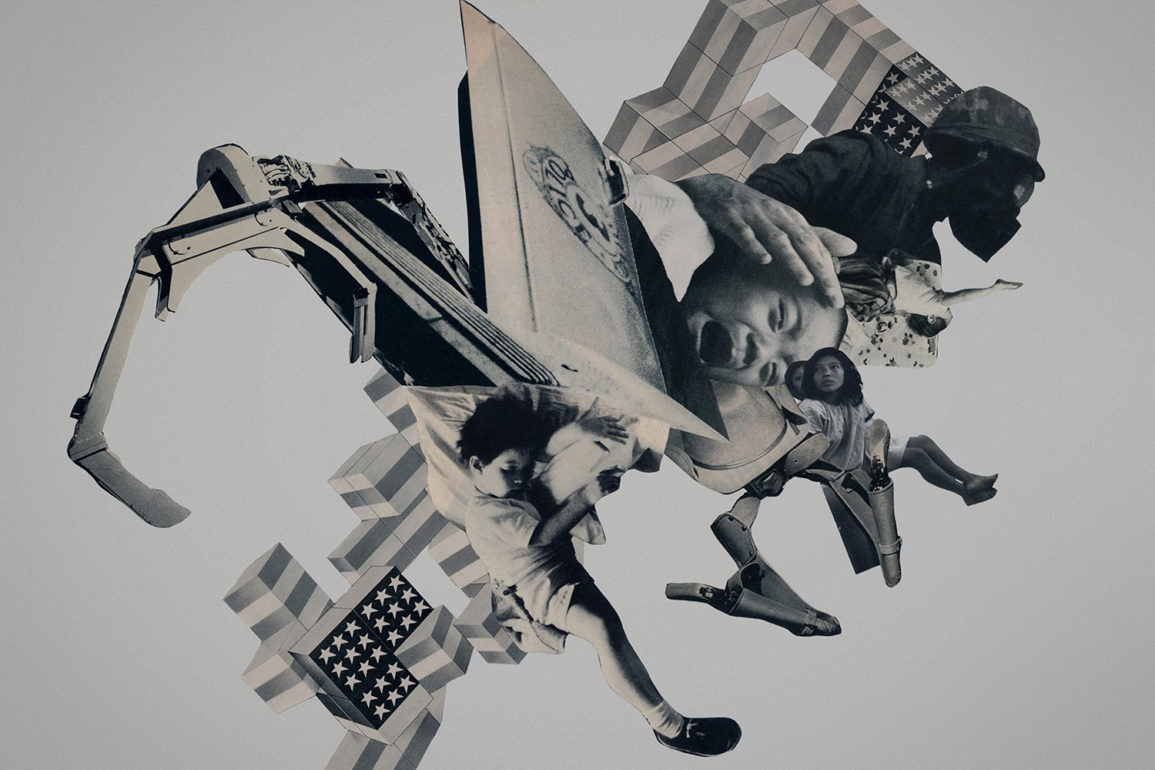 We interviewed the Philadelphia based artist about his work and thoughts and his latest book recently published, collecting the best of his last decade´s work.

– In your book´s introduction Marta Staudinger wonders if  “Everything we love is slowly becoming fiction”  (the title of the book) is a political, cultural o sociological statement? Can you tell us something about it and explain also why it summarizes one decade of your work?
That title is really just an expression for the passing of time.  When you are young, you think you know everything.  As you get older, you learn you really know absolutely nothing and things you once took for granted as being personal truths no longer hold any water.  But the beauty in “I don’t know”  is that the road forward it completely wide open, if you are receptive to it.

The only thing that is true is the present moment—everything else is fiction. Once the present moment has past, any recollection or revisiting of that past moment has to be seen through the lens of the viewer, which is ultimately colored by personal preference and bias. History is just a matter of perspective.

– Your work has been evolving over this decade but still has built a style that is unique and personal. How do you see your evolution during this years? And what do you feel that is the essence of your personal approach to your art?
I have recently come to realize that my collages are really just portraits. They are a distinct shape placed in front of a relatively blank field of color.  Like a person’s face or their body language, that shape is very important to me.  And like the best portraits, the collage has to have some depth of mystery, it must be hiding some kind of secret within. It needs to live and breathe on it’s own.

Part of the reason for doing this book at this time was I felt like I was at a stylistic crossroads. The real struggle is trying to differentiate between continuously developing a personal style verses just blindly repeating yourself over and over again.  And the line between the two is blurry at best.

See, I first began making collages around 2004 but the reason I decided to start this book at 2007 was because that was the year I believe I had my first stylistic breakthrough. Before that, everything felt forced.  But then I started making collages that didn’t look like anything else I’d seen up until that point.  (This was before I had heard of any online “collage scene” – the only other collage artists I was familiar with were Ray Johnson and Dash Snow).  I got really excited and just tried to follow that path as closely as I could.

So, as things started to once again feel forced, I decided it would be best to look back before moving forward.  In doing that, I really got a sense of how my style evolved.  Over that period of time, my work became more refined but also a little more complex. The messaging became more direct.  I started incorporating abstract pieces in there as well as gouche and other mediums in an effort to break things up. I learned a lot about myself and my process while putting together this retrospective.

– As it appears in some of the texts of your book, you seem to be really careful about the process of hunting, stocking and archiving the material you use to create your art. Which place does collecting has in your work? Has the stuff you’ve been collecting changed over the last decade -and if so, how did it influence your work?
My process of collecting has changed slightly over the last decade, simply because time is tighter these days.  Being a father, it’s just harder to find a completely open afternoon where I can lazily scour thrift shops and antique spots for little gems of print media. It still happens from time to time.  And I’m lucky enough to have friends and acquaintances who will tip me off any time they stumble across a dusty box of old magazines at their local yard sale.

Another issue with collecting is you eventually start to run out of space so, in an effort to fend off any metamorphosis into a full blown hoarder, I’ve become more selective with what I collect now.  And the allure of finding vintage magazines has worn off a little. I’ve seen so many issues of National Geographic at this point that I’ve become desensitized to the content.  It all starts to look the same. And if I’m not excited with the materials, it shows up in the work. So I’m currently on the hunt for different types of material.  Something exciting and exotic. I want to change up the format.

– Which are the issues that you want to surface in your work? Had these changed over the years? Can we read a “History of Joe Castro” looking at your work retrospective?

All my work deals with relationships, whether it’s my relationship with society or with technology, politics, family and friends, life and death. While I don’t think this book is an accurate history, it is a time line of growing up. Part of the reason why I chose to include the interviews along with the images was to show a change in my personal perspective, however subtle it might be.

I did a lot of living in those ten years – friends passed away, I moved to a different area, had great success as well as personal failures.  But most importantly, both of my daughters were born in that time period which had a profound effect on my work.  But instead of becoming more child-like or playful, the work became much more serious, and, if I’m honest, a little darker.  You see the world in an entirely different light once you become a parent because you’re playing at higher stakes at all times.  And I started to take my work much more seriously and tried to hold myself to a higher standard because I wanted my kids to be proud of me.

All my work deals with relationships, whether it’s my relationship with society or with technology, politics, family and friends, life and death.

– How do you feel the place of collage in the contemporary art has changed over the last decade?

On a basic everyday street level, I think the amount of collage artists working today has increased tenfold. With instagram, it’s so easy for an artist to start cutting up pages and posting work to an online community of other artists. That being said, there’s a lot less originality out there. Not many people are coming out with a signature style, which is sad. People seem to be more concerned with getting likes and followers than with being honest or original.

I’m not sure that collage has really had an impact on the “contemporary art” world in the past ten years.  I would love to see more museum exhibitions, more serious collectors getting involved, more exposure from major publications. But  I meet so many collage artists that lack confidence and are just so apologetic about their work. Collage artists need to stop apologizing for being collage artists and they need to have enough pride to stop pricing their work at less than the cost of framing it.

I love the collage community, and it’s been very kind and supportive to me but at the same time it often feels like we’re making collage art strictly for other collage artists.  We’re all sitting in one larger circle, getting patted on the back while we pat the back of the person in front of us, etc.  There’s not anything wrong with that but I would love to see collage break out into a bigger arena. As a medium, respect is due.

Collage artists need to stop apologizing for being collage artists and they need to have enough pride to stop pricing their work at less than the cost of framing it.

– Where you’d like to be in ten years time?
Hanging out with you in Barcelona, sipping a little vino before our retrospective collage exhibition opening at MACBA.