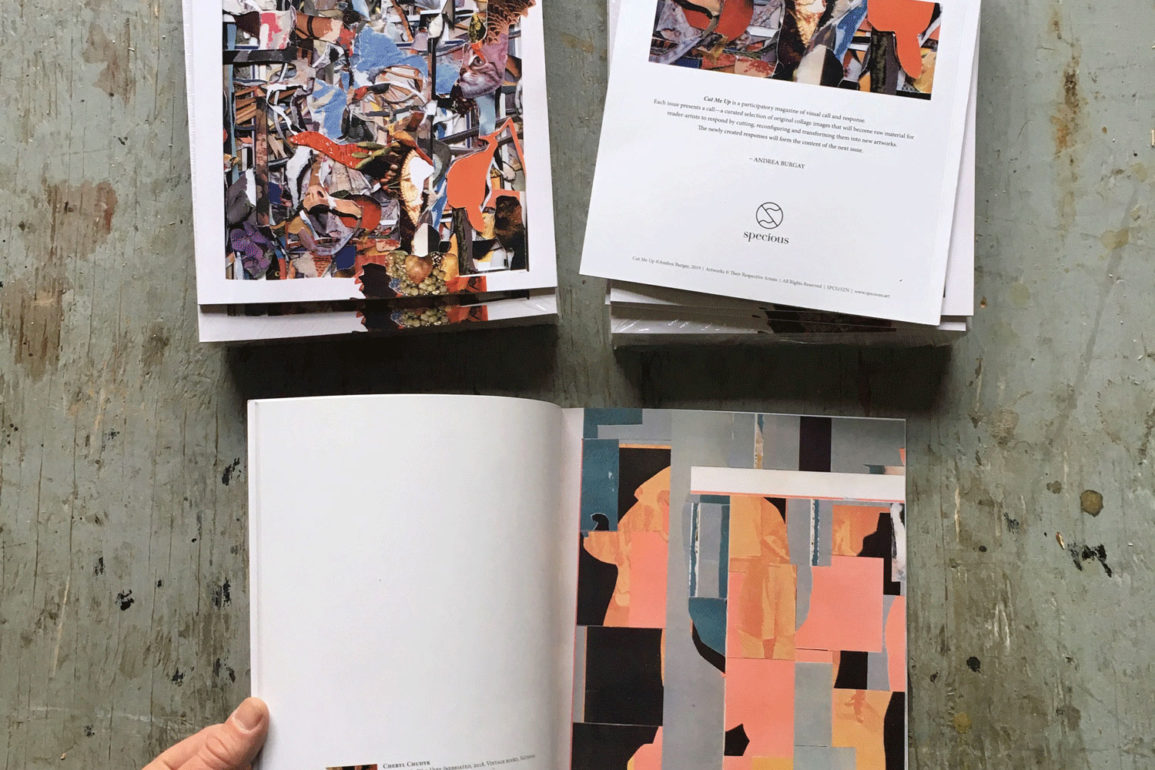 Cut me up magazine. Publishing art to be teared apart. As poetic as beautiful.

We interviewed Andrea Burgay, the artist and editor behind this awesome magazine / project that involves buying something to be destroyed. Much more than an anti-consumption statement, this is a brillant idea.

– Can you tell us about Cut Me Up magazine?

Cut Me Up is a visual call-and-response collage magazine. Each issue is created from artworks made by cutting up and responding to the previous issue/artists’ collages. Cut Me Up is both an ongoing interactive project and a document of contemporary collage and mixed-media art.

The first issue of Cut Me Up, First Call, featured nineteen collage works that I’d made for the project from 2016-2018. I wanted other artists to look at these works and respond to them, using them as the starting point for something new. I was curious to see how these initial works would be interpreted and how other artists could visually express their responses.

The second issue of Cut Me Up (released on January 1, 2019) is a curated selection of the response artworks we received. They showcase the wide range of approaches to collage that can come from a singular source and begin an ongoing visual dialogue between artists.

– Which conceptual / ideological issues led you to the circular idea of publishing collages that will be destroyed to make new collages for the magazines next issue?

In my own work, I’ve been interested in deconstructing physical materials that hold personal relevance in order to understand them and harness the associated psychological connotations to create something new. I like the idea of excavating materials from the past and deconstructing precious things, as opposed to preserving and collecting.

In the book Art as Therapy, by Alain de Botton, I related to his idea that the relationship that we have with the reproduction of a work of art may be deeper or more valuable to us because we can bring our own reactions to it. “It feels safe and acceptable to pin it on a wall, thrown it away or scribble on it, and by being able to behave so casually around it, our responses come alive.”

I think the idea of cutting up something precious is liberating and will create deeper relationships with the published artworks then if it was a book meant simply to be viewed.

– What is the process of curating each issue?

I could only wonder what kind of response we would get to Issue 1. I’d been working on the idea of Cut Me Up for several years and just getting it out into the world was very exciting. I was amazed when responses started to pour in. We received 125 collage works from 48 artists, with several artists submitting entire portfolios of work made from Issue 1.

John Whitlock and I co-curated the second issue of Cut Me Up, titled Inside-Out. Aside from being a great artist himself, John has been an early and great supporter of Cut Me Up, and the magazine is published through his label Specious Art.

For Issue 2, we were seeking responses that spoke in some way to the work from Issue 1, responding to color palettes, textures, compositions or concepts. As co-curators, John and I both made a shortlist of works that fit our criteria. Then we narrowed that down to final selections that would address a broad range of concepts and approaches, while still working together as a group.

One of the published pieces, turn of the century, by Tres Roemer, focuses on color, using mostly negative spaces and moving away from the density of the original works. Clive Knights, initiated explorations of depth through superimposition and shadow. Cless kept the original composition from the work he used as source material, adding and removing surrounding elements. Tara Pellegrino’s piece has a layered, detailed approach, similar to the works in Issue 1, but made through a process of image transfer. We asked the artists to describe their experiences working with Cut Me Up, so they could be published alongside their work and give readers further insight into their process.

I love all of the works we chose, but there were so many more beautiful pieces that didn’t make cut for the print edition. The Cut Me Up website will feature a gallery of all the response artworks.

– Why you chose to have a guest curator in each issue?

Future issues will have guest curators, each with their own call. Each curator will ask artists to consider specific techniques or concepts in their response artworks, essentially creating an exhibition within each issue.

Just as each issue of Cut Me Up is made of response artworks, guest curators are asked to write their curatorial calls by responding to the artworks published in the previous issue, assessing what possibilities lie therein for a new direction.

Having guest curators brings new vantagepoints and sets of criteria, keeping the magazine fresh, with the potential for submitting artists to have their works continually seen by different eyes.

Our guest curator for Issue 3 is collage artist and Director of the Thompson Gallery at The Cambridge School of Weston, Todd Bartel. Todd’s writings on collage and its history are extensive and illuminating and he has curated many wonderful collage exhibitions, including Strange Glue—Collage at 100. His call for Issue 3, “Erasure Leads to Blankness—a Tabula Rasa,” asks for submitting artists to consider the environmental implications of reusing paper through collage, considering blankness and landscape.

Within the Cut Me Up responses, there were a wide array of different styles within the submissions. Many artists incorporated other media—drawing, painting, even sculpture.

I think a key element that led to this diversity of approaches was the abstract nature of the works in Issue 1. My works use color combinations, the texture of torn and folded edges and densely layered details to allude to the passage of time, deterioration, and spiritual themes of growth, rebirth and ritual. There are a few small representational elements throughout—a cat face on the cover, a clay-faced character, and a sun/moon form—and these realistic elements were well-represented in the responses. But I think the lack of definite imagery that could be related to in a common way led to artists taking the source material in very different directions.

– When finishing each issue: How do you feel? What happens inside you?

I am thrilled with the completion of each issue! l grew up reading books, looking at art in books and learning about the world through books. There is something about having things enclosed and catalogued on pages and the intimate experience of reading that I have always enjoyed. When completing each issue of the magazine, the collages feel organized, safe, enclosed, and always accessible.

Finishing the second issue was very exciting. I was humbled by the artworks we received and very proud to have the opportunity to publish the works of artists who I admire.

– Which is the future of Cut Me Up? What do you expect from upcoming issues?

We sold out of Issue 2 more quickly than I expected, so we just completed a second edition which is now available! And the deadline for submissions for Issue 3 is approaching on April 1, so I am looking forward to seeing the work that comes in.

I’ve also placed Cut Me Up in several bookstores, Quimby’s and Powell’s in the U.S., and I’m working on placement with a bookstore in Spain. I hope to reach as wide an audience as possible, and I have always loved the discovery of coming across an exciting book while browsing. If you know a venue that would like to sell Cut Me Up, please reach out!

I’m also planning an exhibition of the original works published in the magazine, so that viewers can see them up close and personal. 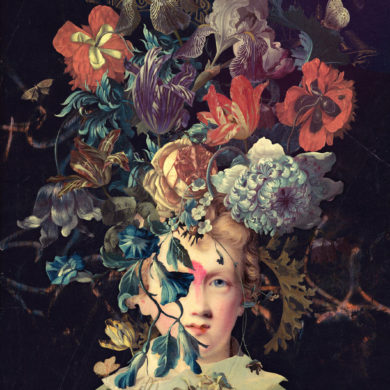