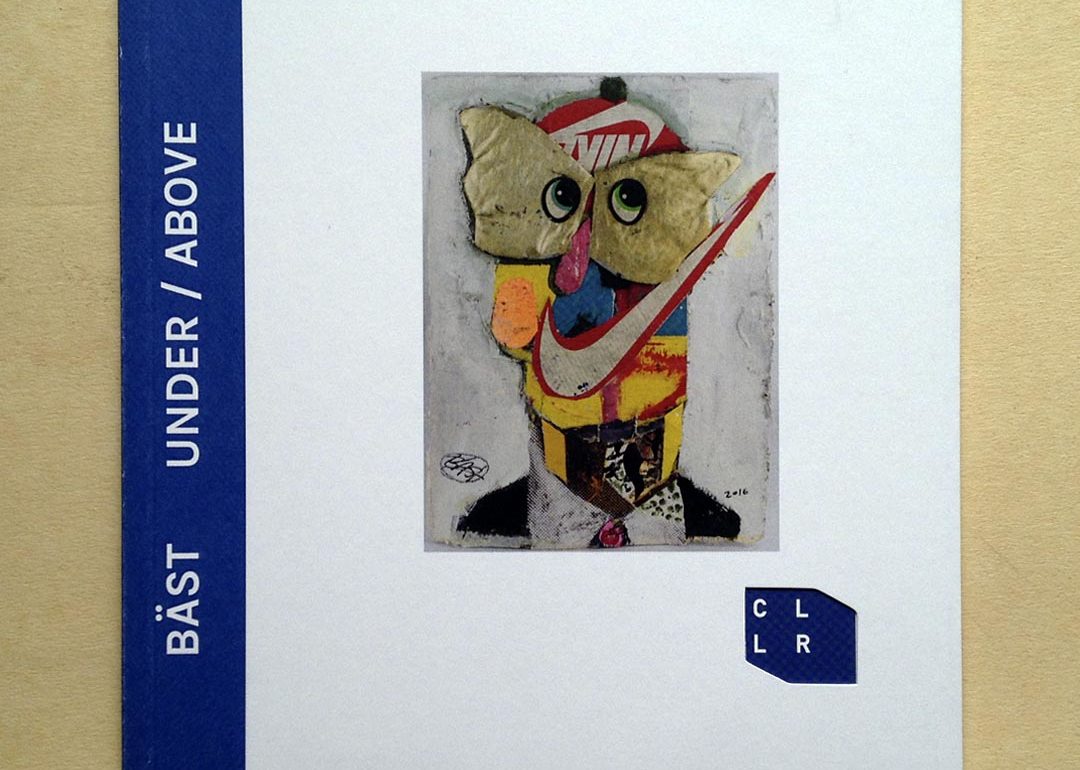 A selection from our personal bookshelf: BÄST – Under/Above | 2017
Published by Cellar Contemporary

Anyone can make a gum. Selling is the problem.
W. Wringley

American culture is the culture of products. The brand and its recognizability are the keys to communicate concepts and values that qualify the product itself. This same product, is brought in the everyday life through the association to a life style, a social class, or a status symbol. The system of art acts accordingly, namely by taking back the product and uncovering the mechanism – suffice it to consider the Campbell Soup from Warhol.

For an artist of a young (not) generation, that since the beginning of its activity has always took good use of brands and consequently of what they represent, it is natural the transformation in logo of its own name, or better, of its own pseudonym. “Bäst” is word that appears for more than 15 years through Brooklyn’s streets. Behind which,an heir of posting and overlapping practices, that take to the re-inscription of the identity of the work-place, conceals itself.

A constant element of his work is the collaboration with other artists, as such in the case of the temporary installation Fly Tip Theatre, realized with Paul Insect on Bansky’s invitation . for his Dismaland, and the Deluxx Fluxx Arcade installed in the Brooklyn Museum with the collective FAILE. Bäst has also signed a collection for Marc Jacobs and works occasionally for other fashion brands, contaminating as well other creativity sectors that confine with art. In his works is not rare to find high quality fabric, patches, pallets and sequined, “withdrawals” from NIKE’s clothing, in particular from the model “Air Jordal”, inspired by the ex-NBA- champion, who is also symbol of Brooklyn .But likewise from the Blow-Pop envelopes, the candy with the chewing-gum heart, resembling Bäst’s artworks, which draw attention with their playful and irreverent aesthetic, capturing the eye and the taste, making one eager for a never-ending chew, or watch.

The massive use of objects in his works recalls the practices of the Syntetic Cubism in which, for example, the newspaper clipping obviously identifies itself with the whole newspaper, but it is also an element that works well in the composition. Likewise, in some of Bäst’s collages the stamps, the Tropicana’s juice jugs, or the “Exotica taste” deodorant for car are both a symbol and element of balance for the artwork itself. Also gives its contribution to the transversal nature of the artist the complete discretion that protects his identity: nameless, ageless. He does not want to be photographed if not from behind a raised glass that both keeps his face hidden and toast society in its whole.
He even lets puppets do those artistic gestures that complete some of his works. He is their constructor and pilot, and like a puppeteer he gives them motion and life from the ceiling beams. Artworks that realize other artworks, in the sign of the (not) randomness.
This continuous juxtaposition of compositional layers shows a narrative need, that can be translated in a research that is visible in the selected artworks for the Under/Above exhibition. The book as an object is the starting point for the editing of a catalogue of characters “typified” in their masks – accordingly, the term “persona” before rotating its
meaning towards the concept of “individual, human being”, meant in old latin “mask” –, and present in the diverse environment frequented by the artist.
Some of his works are directly realized on the back of old books’ cover, as if it was the first clue to understand Bäst’s upside-down world. His bi-frontal collages are the pages of his story and represent the two astonishing sides of a reality, with a special attention and care for outsiders, the true protagonists of Bäst’s people. With a well-made remix of high and low culture, the artist gives a complete framework, manifest of his under- and above- ground lifestyle and of his orderly mess, where everything has a double, or at least right,
interpretation.

How often does it happen, during the listening of a vinyl, that the b-side turns out to be richer and more complex of it’s a-side?