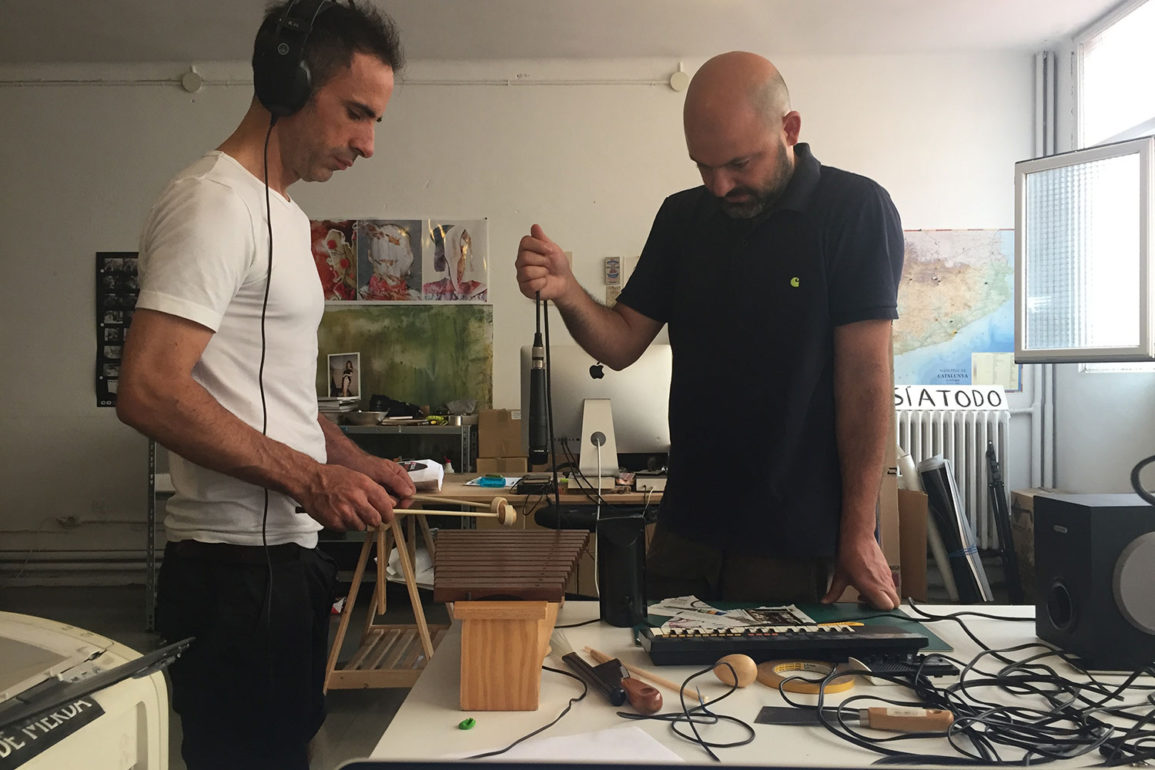 Assemblage is concept related to a form of art, but also to a form of social interaction. The idea of context and mixture is present in both definitions. And this is the starting point for this new way of creating and sharing our thoughts, work and knowledge with the global collage community. This is a way of showing our work focusing on the process; it is our proposal to think, discuss and make contemporary collage.

Assemblage is also a global event curated by The Weird Show in the form of artists gatherings happening at the same time in diverse cities worldwide were everyone will be working and discussing about the state of contemporary collage and it´s future. Each city will also connect with the other Gatherings elsewhere to share ideas, process and thoughts. During one day, some of the most talented collage artists worldwide will be helping to redefine contemporary collage.

This is what happened on july 8th in Barcelona.
Hosted by Max-o-matic
with Matías Rossi & Tiago Pina. 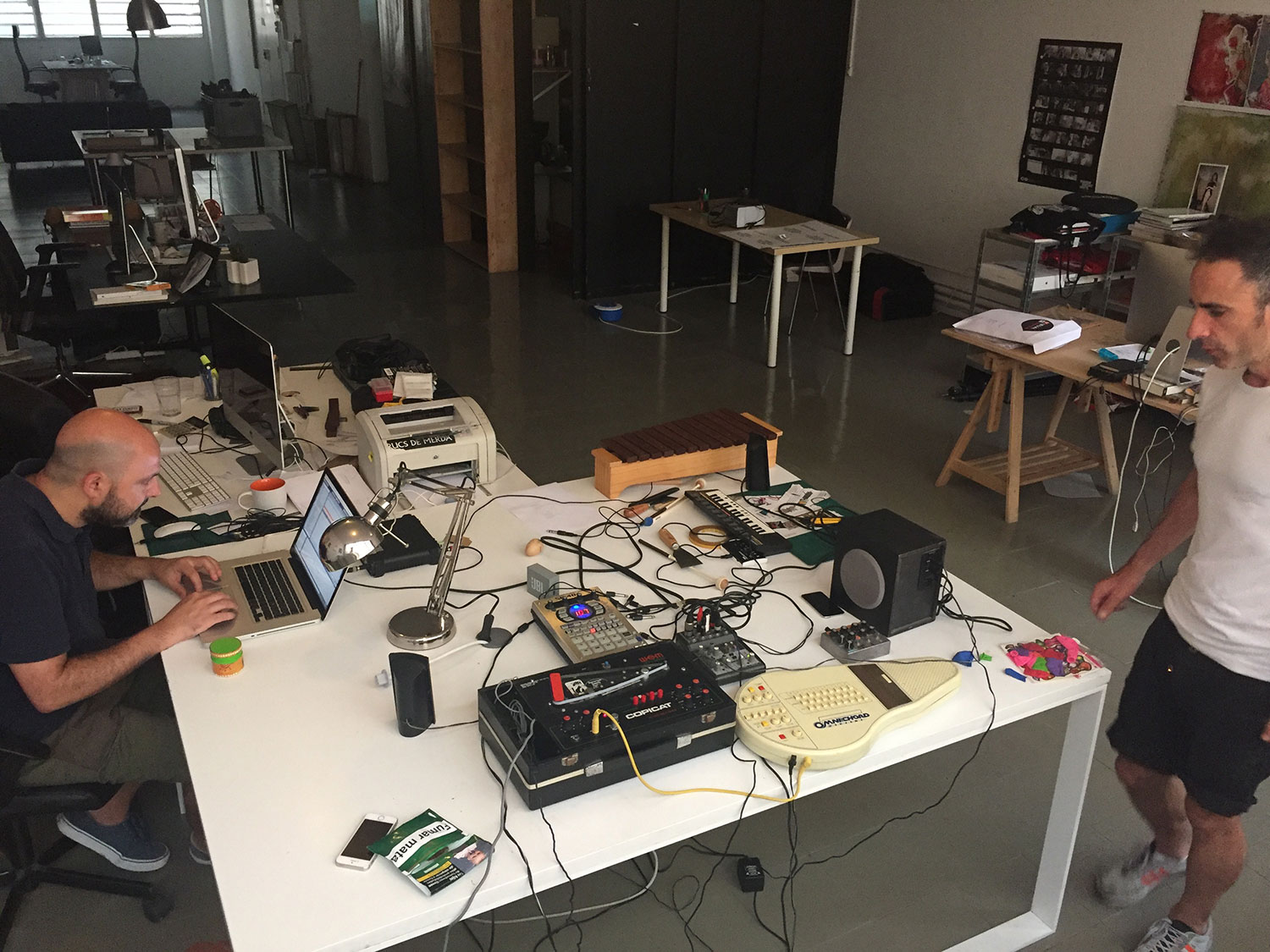 Saturday morning. Early but not THAT early. Matías Rossi: Musician, music nerd, communication strategist.  Tiago Pina: Designer, illustrator and Musician. Máximo Tuja / Max-o-matic: Collage fiend. We gathered in Tiago´s studio in Gràcia, Barcelona. The invitation was to make and talk about sound collage. No other explanation was given -apart from the basic information about the Assemblage! Event happening all around the world that same day. Tiago and Matías brought all kinds of gear and instruments. During one hour we made sounds that were recorded via Ableton Live and started overlaying them and slightly toying with them. The resulting track was starting to sound nice, but a simple and deep question arose:

MR: … When i was thinking about what we are going to do today I was thinking on Black Dice, the band that shared rehearsal space with Animal Collective. They work with collage, juxtaposing elements without necessarily looking for a song; they just overlay elements giving their music the spirit of collage. And what we are doing right now is happening something similar.

Other different way of seeing collage is related with reusing elements that were used in other situations, decontextualize and use them all together in a new composition.

TP: I also think that a main issue when talking about sound collage is the origin of the source material that´s used. And the randomness involved. When someone composes a score for an orchestra, everything´s defined beforehand; there´s a previous research and study of what will be recorded to get a desired result / effect. While on the other hand in collage, the main thing is to mix found pre-existing sounds to create something new…

MR: If we agree with this, what would happen with improvisation in music? Would that be collage in the terms you defined it?

TP: No, because it´s not made out of external elements… you improvise with your own material (instruments).

MR: And what happened with what we have just did -recording our own random sounds? We have created those sounds… 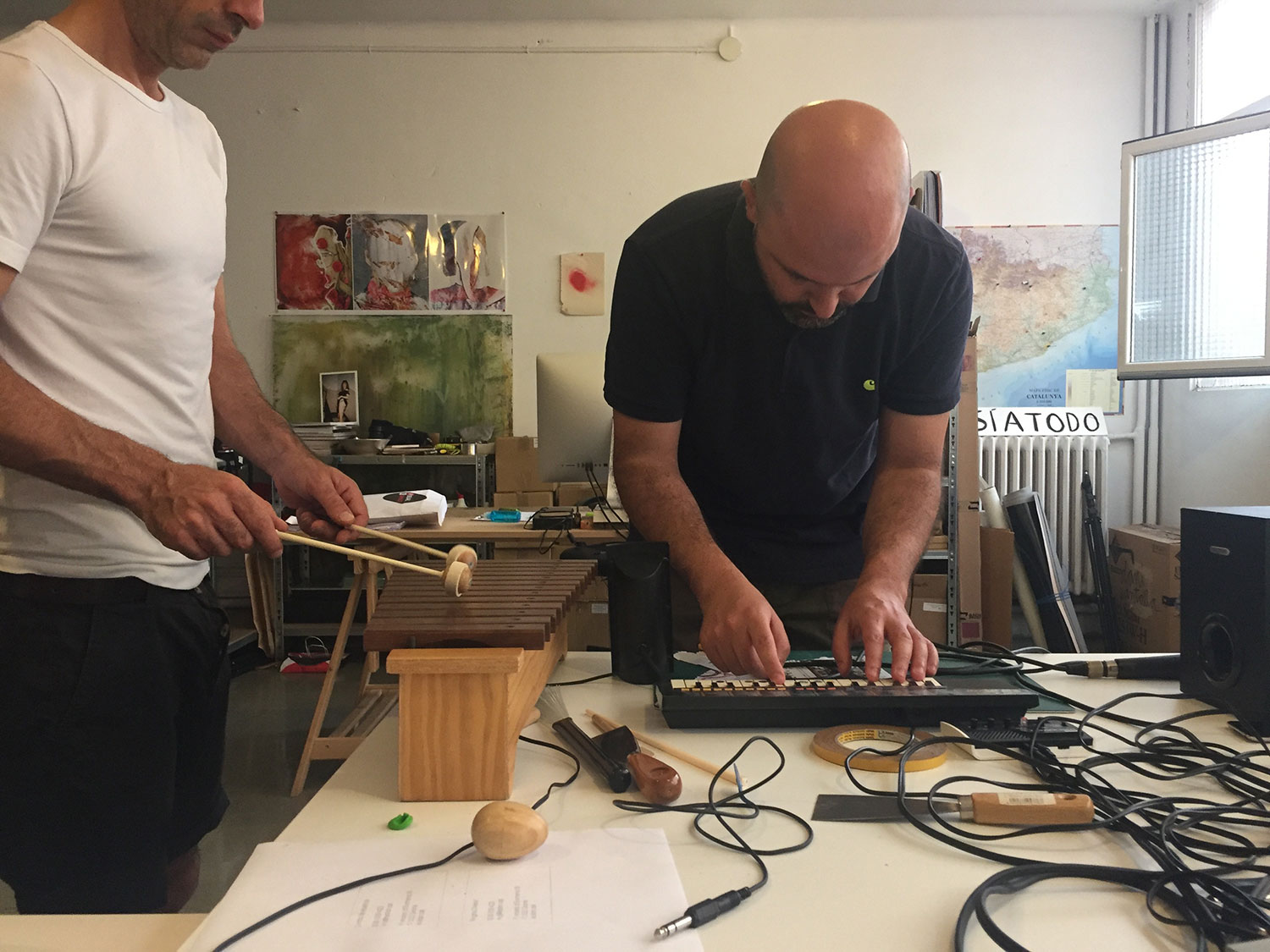 MT: What you think we would need to add (to our current in-progress collage) have a proper sound collage?

TP: The spirit of collage is related with shaping random elements (sounds, paper, whatever) to create some kind of new composition…

MR: Thinking about what we´re saying, now I can see more clearly that what we are doing right now is -if we put it in visual terms- a mix media collage. It´s like we are using, apart from paper clippings, paint or other elements that we create and capture. It comes to my mind Tamar Cohen´s work. Apart from overlaying collaged images she screen prints her work. We are doing something similar to what Tamar does in our own terms. We have recorded sounds that we have created and now we need to start a second part of the process where we have to overlay this layers.

MT: It comes to my mind a simple question: can we speak about collage in music?

MR: Definitely. People like us is collage. Christian Marclay makes collage with sound.

MT: But collage is more an aesthetic or a way of working with sound?

MR: Collage is a tool.There are projects like John Oswald´s Plunderphonics that are clearly sound collage.

TP: The main difference between composition and collage is the idea of production. When we talk about collage, we are talking about external sound sources that were captured without any intention -or with a loose intention. And with that sound scouting, the posterior juxtaposing of elements will have a sound collage as a result.

In visual collage not everyone works with the same techniques. But collage is not only defined by the mixture of disciplines or techniques. There´s something else that defines collage´s essence. If you paint a paper and cut it… Is it collage?

TP: Sound collage is the mixture of random elements that haven´t got any previous link, where the juxtaposition and overlaying of these sounds altogether create a new composition.

At this point we went back to work. Selecting sounds clips (cutting) and placing them in the time line that the Ableton Live provides (pasting). There´s actual cut and paste. Short clips are taken from longer pieces and mixed with other clips creating something new.  Of course, We also kept on talking… 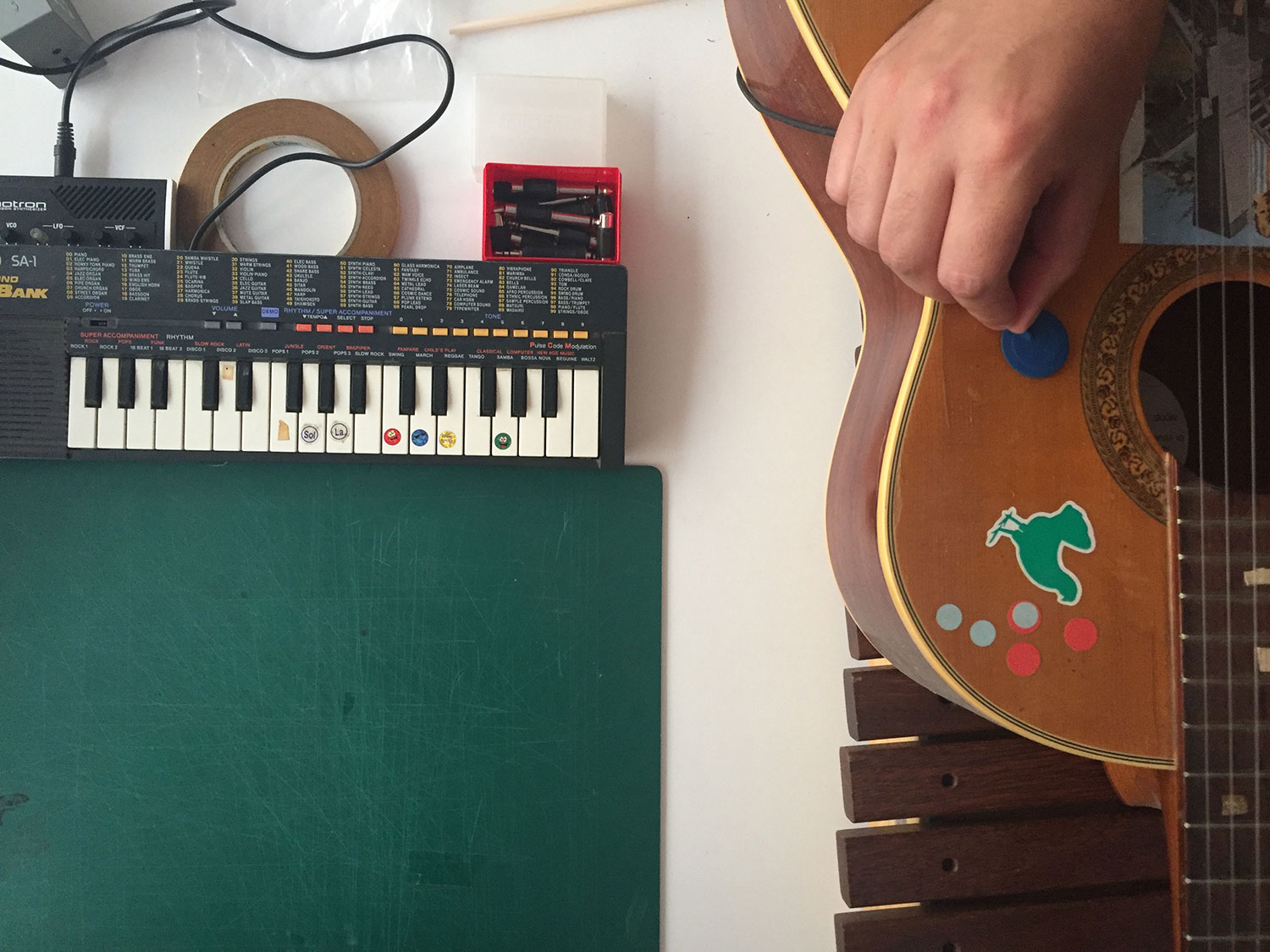 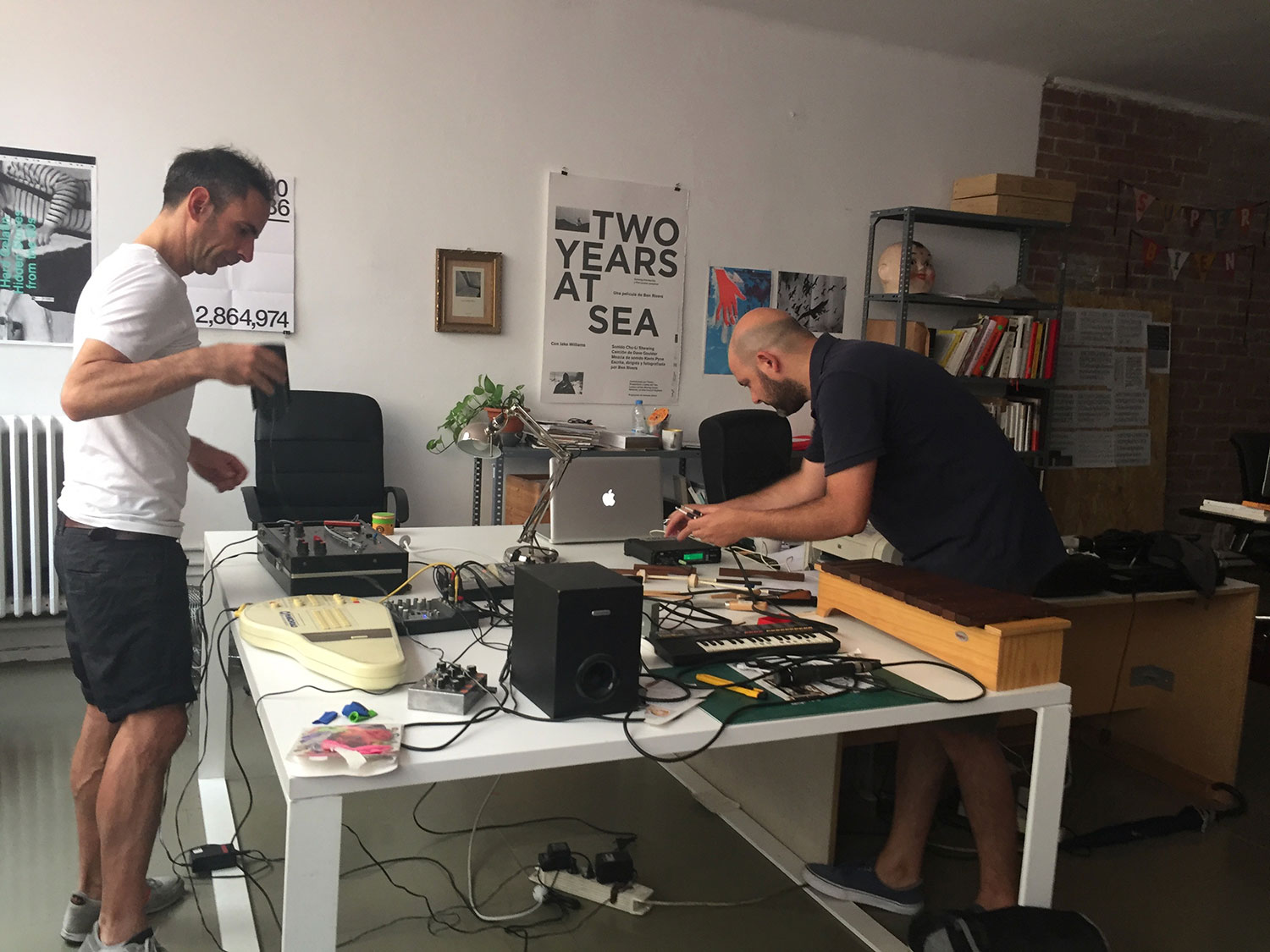 MT: When working in “visual collage”, there´s a big difference in working with digital collage and analogue / handmade collage. What happens in music?

TP: Yes, there´s a difference. There´s something related with the possibilities that the computer gives the musician. Analog collage, cutting and sticking tape, implies a different approach; it can be something similar to what happens in design with letterpress printing. It implies time and the impossibility of going back, undoing things. And the results are more something like a leap of faith… you never know what to expect when doing analog sound collage. On the other hand, with digital collage, everything is faster, immediate and there´s always the possibility of undoing… you can have more control over the process and the margin for unforeseen things is lower.

Thinking about this Christian Marclay comes to my mind. He uses collage as a medium for expressing other issues, but he definitely has collage in his work. He started art student in New York and loved music, but he didn´t know how to play any instrument. So he started performing and working with vinyl records. He cut and intervened actual records so the player´s needle jumps randomly from record to record every turn. He can make one record from pieces of five different ones and create something totally new and unpredictable.

TP: it´s like working with a sampler, but in a very physical way…

MR: He has tons of vinyls… and he has been experimenting with this for a long time.  He has created a record that I really like where one track made only with only music from Bach; another from Martin Denny…

When he moved from America to Europe he couldn´t move his gigantic collection, so he started working with films. There is when he won the Vienale de Venezia with the piece named The Clock. In The Clock he searched in films scenes with clocks in them; then he organized them by the hour that appeared on the clock and then edited them in that order. So he had 24 hours with parts of movies showing the actual real time in clocks…

So at that time he switched from from analog to digital, editing directly from movies taken from the internet. But Marclay does many different things. At the Punk exhibition (at Barcelona´s Macba museum), he had the piece where he tied an amplified guitar to the trunk of a car and dragged the guitar through a road. This was related with an incident with an african american that was dragged to death behind a pickup truck by white supremacists in Texas. So Marclay doesn´t make collage. But he starts with the concept of collage.

TP: Collage that is directly connected with the technology he uses. The technique of cutting vinyls implies a certain kind of result that it is different to the one that can be achieved digitally. 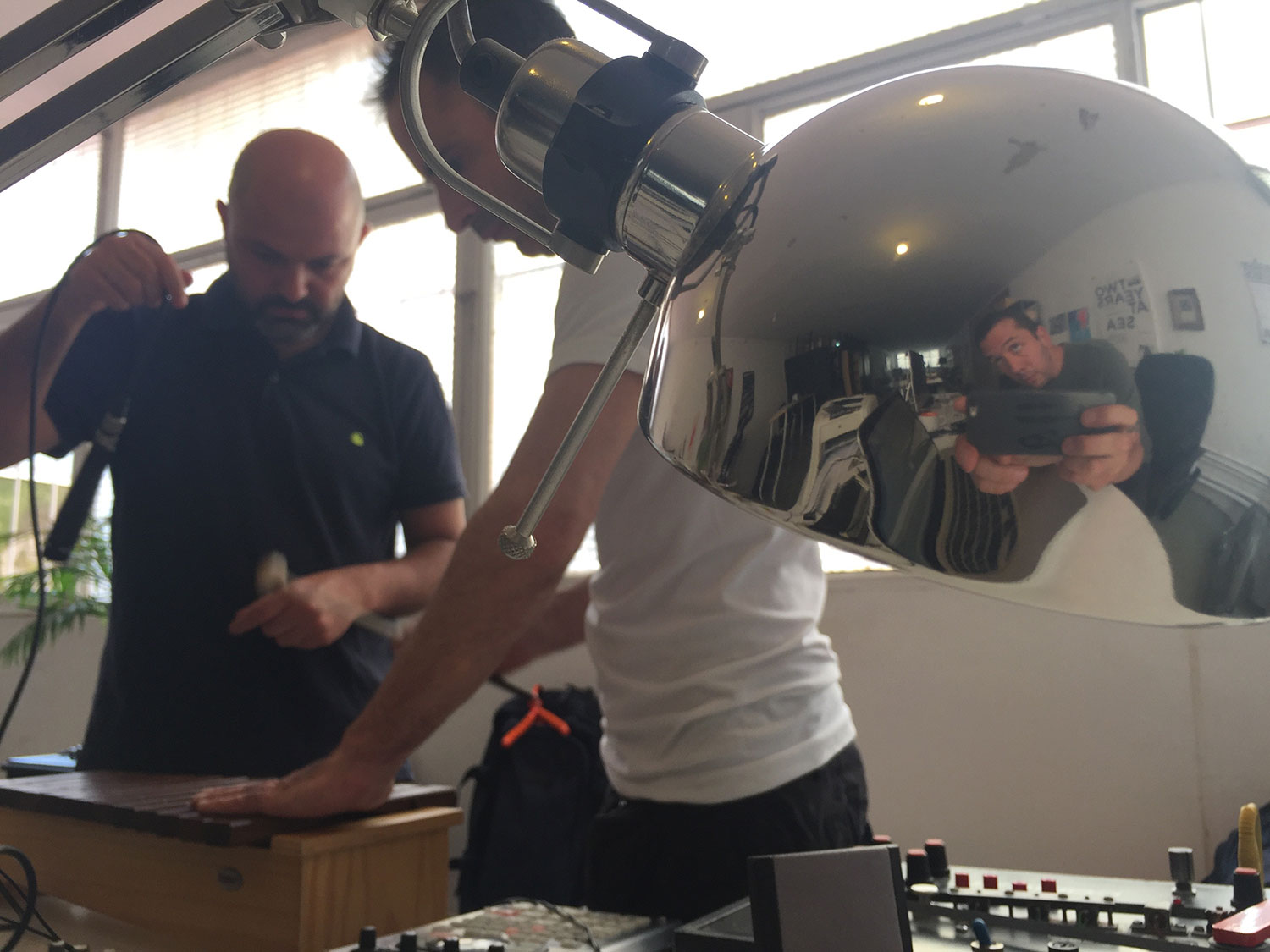 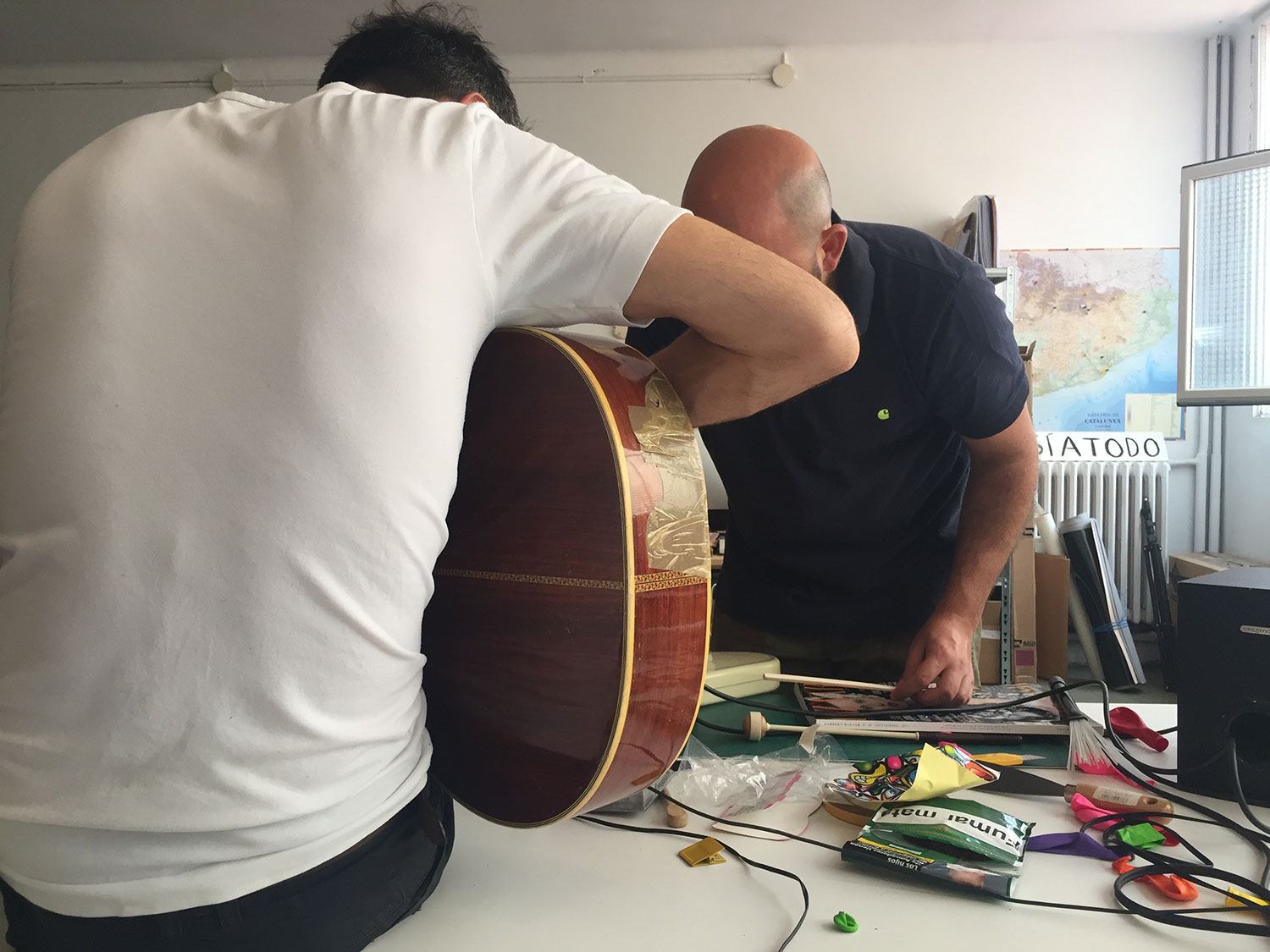 MT: Sometimes in visual arts, digital collage is not as well considered as analog collage. Happens something similar with sound collage?

MR: Not at all. In my opinion, technological advances change the things that are expected to be achieved. I mean, when DJ started mixing with two decks, being able to sync two tracks required a certain amount of skills and ability. But since people start djing with computers and software like Traktor, that same thing is something that the software does automatically… So that isn´t a technical challenge anymore. What´s now interesting is what people can do from there on. The cool thing about Traktor is not being able to easily make what years before was difficult, but the challenge is elsewhere. I love djs that, for example, using this sync function, mix in a super short time a ridiculous amount of tunes. Before it was impossible… but now you need new skills to be able to do it. Technology resolves problems of the past but it doesn´t have to block the possibility of creating new challenges and developing new ideas.

What People like Us does, couldn´t have happened without a digital work frame. The huge amount of samples cut and synched would have been almost impossible with analogue techniques. People like Us can use 30 shorts samples to create a 2 minutes track… they use the possibility of overlaying layers and adding complexity to a track that only digital can provide. So in this sense digital and analog are equally interesting in terms of way of approaching sound collage. 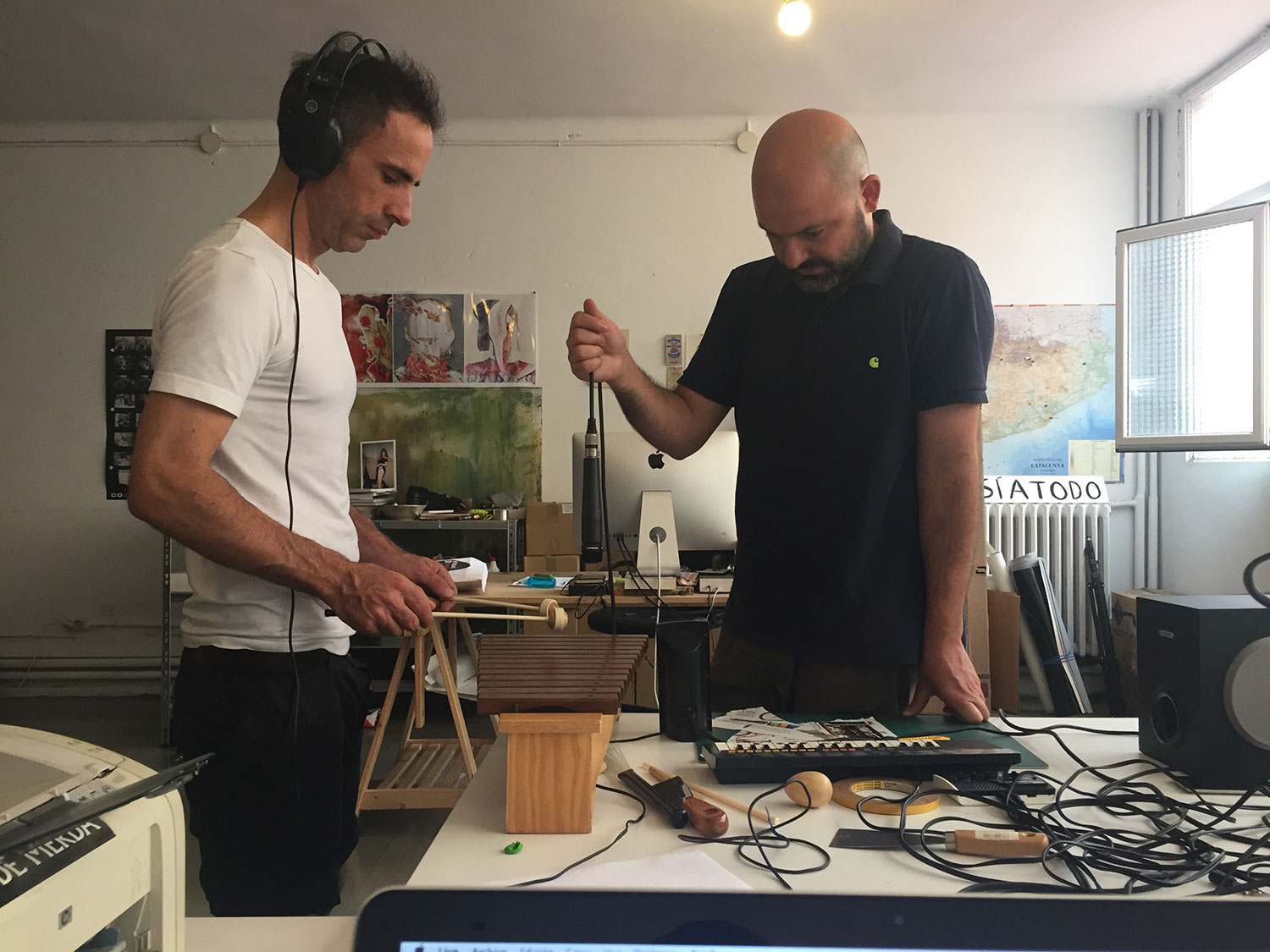 The session kept on going till it was too late. Music has been created and discussed. Collage has been used shaping musical compositions with sounds. The results, below: