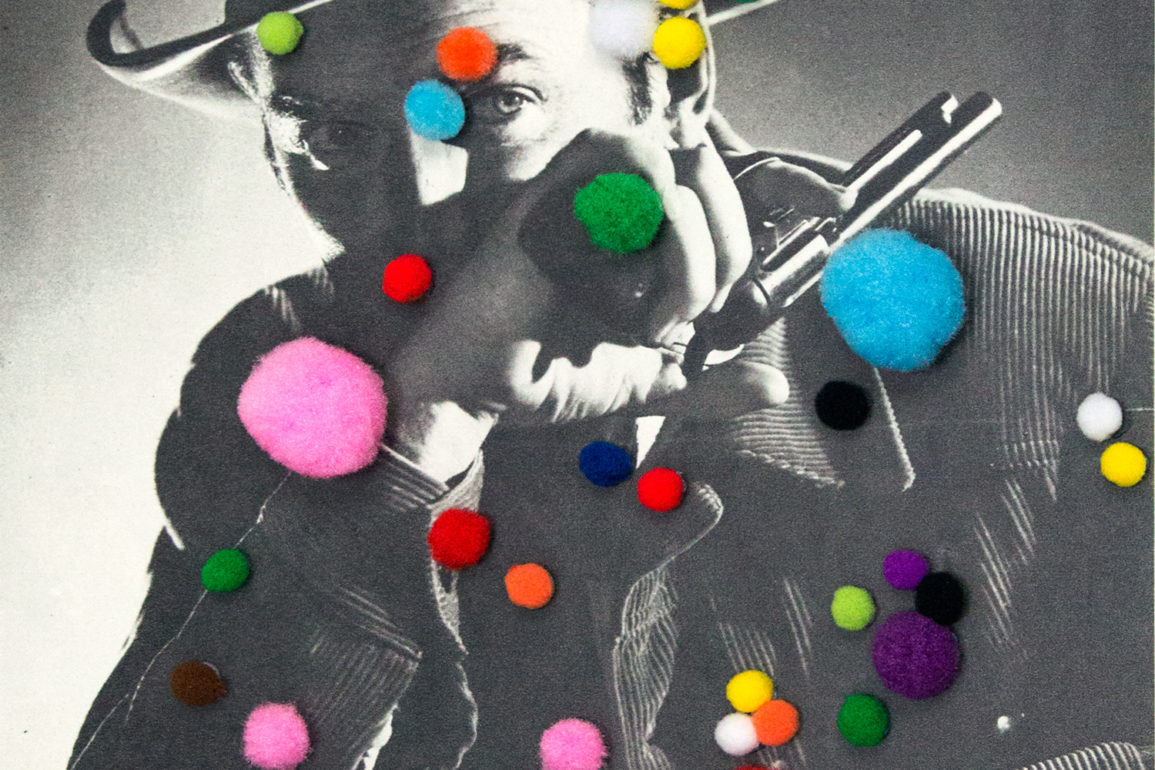 J Patrick Boyle (Jono Boyle) is a British artist whose practice is a hybrid of appropriated imagery, collected memorabilia, song lyrics and other cultural debris. Jono will be part of  the International Weird Collage Show, our 14th exhibition, to be held in London on February 1st, 2018.

Hi, I’m Jono, I’m Irish though I was born in and have lived most of my life in the UK, and currently live in Athens, Greece. I have been making art and doing creative projects for as long as I can remember.

I have never considered myself a ‘collage artist’ as I produce work across multiple mediums, but what I do do is use found objects/images in nearly all my art, so work in a very ‘collage’ way.

Collage is usually seen as ‘adding to’ e.g. taking an image and adding part of another image to it, at the moment I am very interested in subtraction, my piece ‘Untitled (Facsimile Of The Future)’ is a reworking of the Barbara Kruger piece ‘Untitled (I Shop Therefore I Am)’ simply with the text removed. It’s a stretch to see this as a collage, but whether I add to or subtract from it’s one in the same for me – I am playing with the associations that are attached to the found images.

My piece ‘You Won’t Remember The Things I’ll Never Forget’ could be called a collage, as I’ve cut out a white circle from the reverse of a magazine page and pasted it over a found image. But what I have really done is subtract the man who dominated the image and ‘détourne’ it so we now focus on the female, who of course was very much just there originally just to support the man. This fascinates me as I have not changed her in any way, but now we can see things (she has an amazing expression) that we would have totally missed before. This is what fascinates me about using found images and about collage, this revealing of deeper/hidden/dismissed truths that already exist just aren’t seen.

– How does music and popular culture a inform your work?

I don’t know why but I am very drawn to popular culture (music being a huge part of popular culture). I guess it is why some people are drawn to paint landscapes, and others abstract art, it’s just what resonates with me. Maybe it is my background? I was a DJ and promoted club nights since the very early 90s and, though I’ve always drawn and been creative (designing and making t-shirts etc) from a very early age, my journey to being an artist was really started by designing flyers and flyposters. Particularly flyposters, as they share the same space in a city that street art does, and my designs always had an ambiguity to them that was more than their function ‘an art element’ if you like.

I’m also drawn to ‘low art’; xeroxed posters, zines, etc and they are the common currency of popular culture (at least pre-Facebook) and I really believe that there is as much beauty and truth in a line from a pop song as there is in a great oil painting. Lines in pop songs aren’t often held up as great art, or even as useful to show us something, but they can be, and by presenting them in a different way this can be revealed.

–  Paint, print, collage… How do these techniques interact with each other in your work? What´s common in all of them that define the core identity of your work?

So if I work in print, for example, I will still combine existing elements. The print ‘Too Much Too Young (The Vanity of Hope)’ combines a section from ‘The Raft of the Medusa’ with the title of a song by The Specials, and it is how these two very disparate things interplay that fascinates me and is the real power of the piece.

Often the techniques will be mixed, so for a series called ‘You Might Stop The Future, But You Can’t Stop The Party’ I collaged found images (that I had already xeroxed) then produced a blue screenprint from the result, then collaged other found elements over this, then reprinted the original screen, but in black ink. Then once again collaged over this, sometimes also adding oil-stick or pencil marks. But once again, it is all the same to me, I am simply combining pre-existing elements as I see fit to create the piece I want.

– When making collage, how do you select your source material? Is there any special era that you especially like to work with?

I am very much interested in the recent past, especially in terms of pop-culture, we discard the past really quickly and at the same time live in some sort of blinkered worldview that our present is oh so unique and important, yet history shows us that it’s not. Using source materials from the recent past helps to reveal this as their original sources can still be remembered.

I am also very much interested in the associations the found images carry with them, so there are a lot of images, particularly older ones, that don’t have these attachments for me so I don’t use them. I also intensely dislike nostalgia; again, because it infers some fake temporal superiority – ‘life was so much simpler in the 50s, I want some art on my wall from that era’ so stay clear of source materials which imply this too much.

– What´s your definition of collage?

Good question; it is usual to think of cut and paste paper works as collage, but or me collage is simply the combining of existing media. Existing media is usually found items (magazine images and other such ephemera etc) but could really be anything. I guess what I’m getting at, not very succinctly, is it’s making art from things that already exist. So the choice to display two found images side by side is as much collage as anything made by cutting and pasting bits of found images on to one another, at least for me it very much is.

Also, collage is often thought of a funny or whimsical, and thus not really serious. Of course, a lot of collage is, the juxtaposition of the combined elements lends itself to this very easily, but it important to be aware that collage can also be a hugely powerful medium; Peter Kennard’s very direct montages for example, or the eerie power of lots of John Stezaker’s work.

I guess it is the same problem art in general has, lots of it is simply pretty, but truly great art surpasses this and reveals things no other medium can. And I love collage as not only do we get the visual combination of images to play with, they can also carry with them the associations from their original sources which can add further meaning to the work created – in a sense, one can collage ideas as well as images.

– Collage… is cheap because is the future? 🙂

Ha ha, with the growth of digital media the boundaries between collage and originally generated art will probably blur past the point of recognition. Digitally painting including ‘found’ digital imagery will become so easy to produce and so seamless that will it really be collage anymore? And the move to consuming digital media at the expense of printed media is of course massively decreasing the pool of source material future collage artists will have access to. Plus who will think of cutting and pasting images from magazines when there aren’t any magazines anymore? But, of course, as with all past technological changes, art will also change and will still thrive, pre-existing ideas and images will still be combined, it just might not be called collage anymore, and who gives a damn what it’s called so long as it still captivates the viewers! 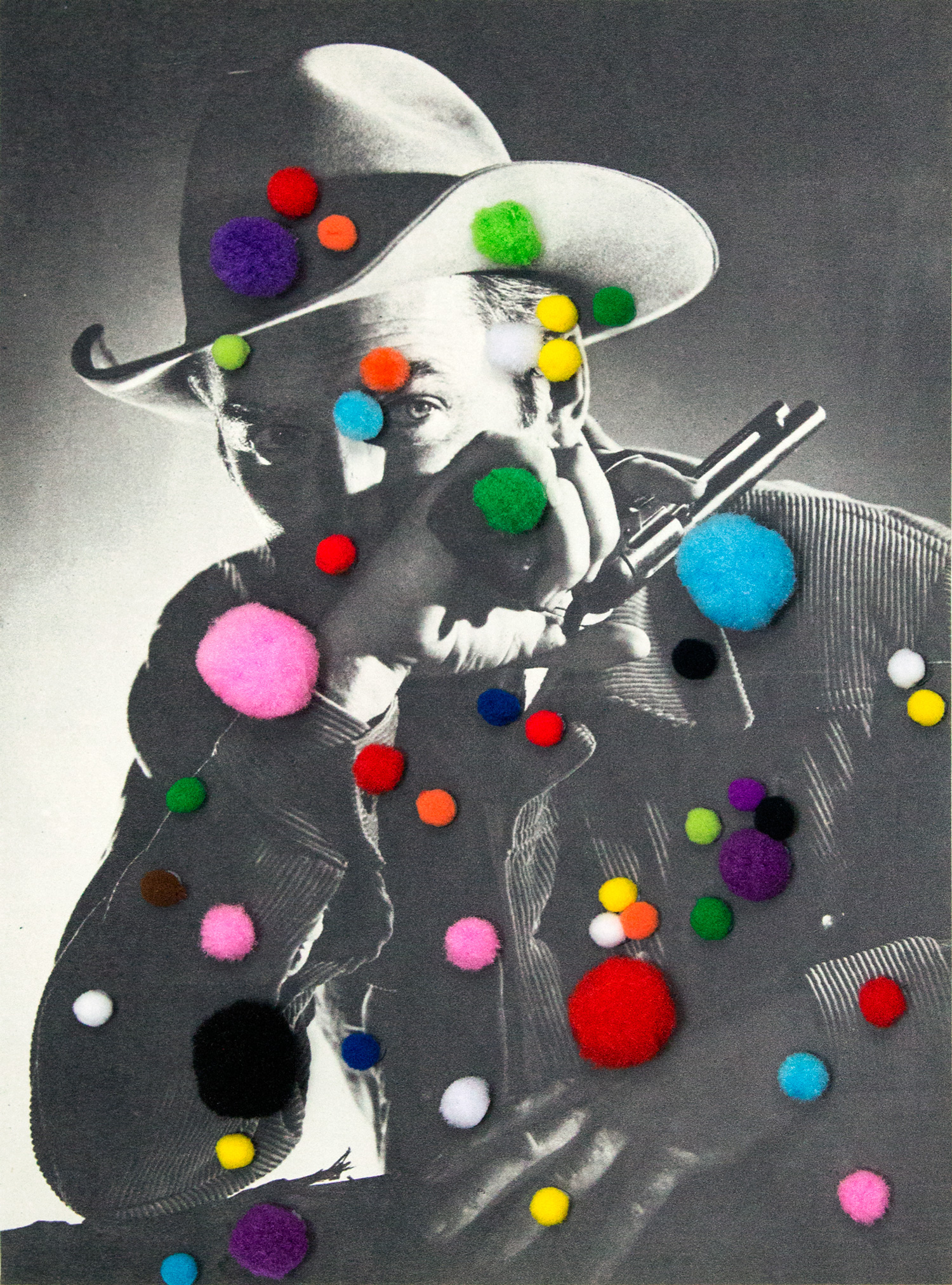 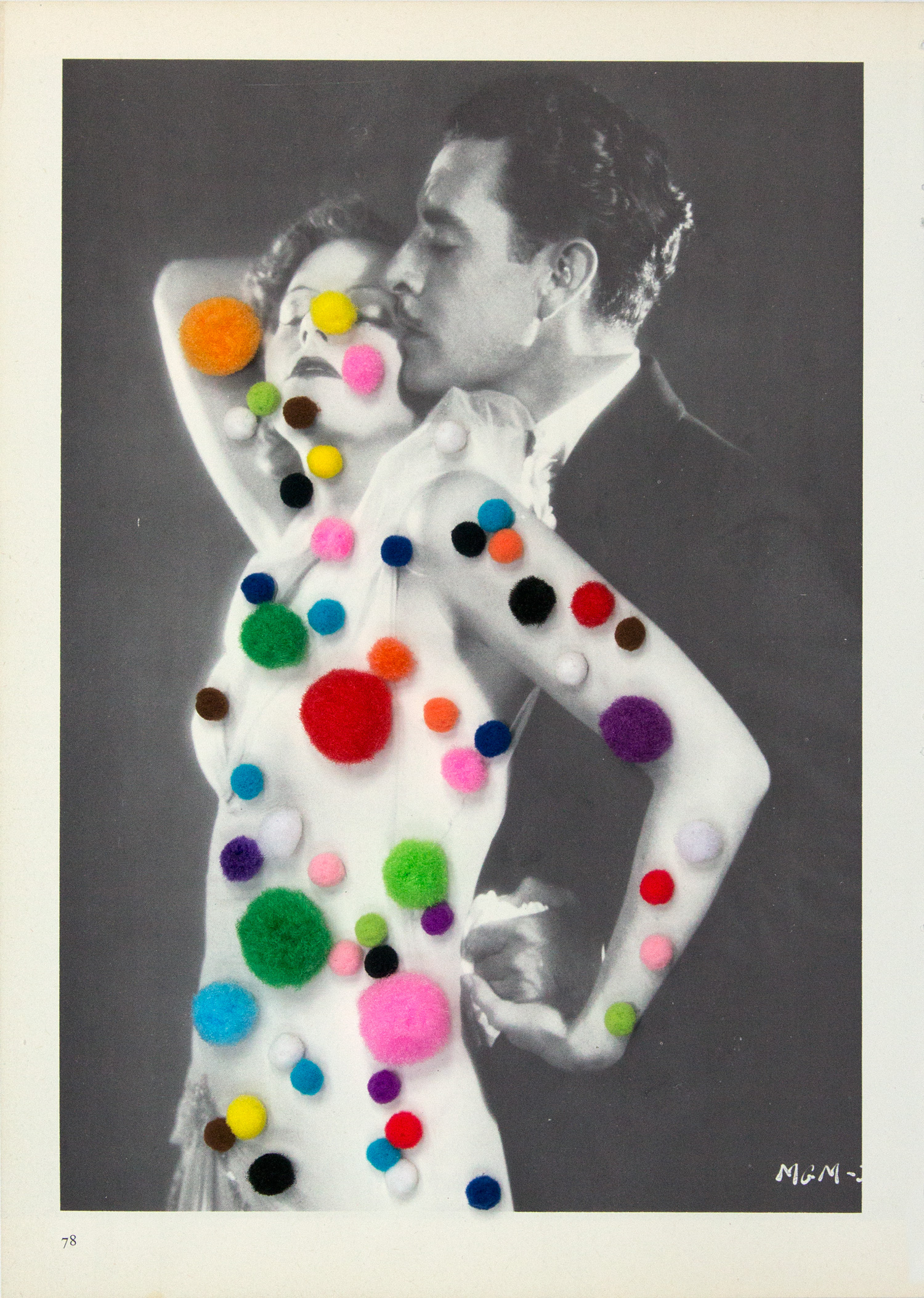 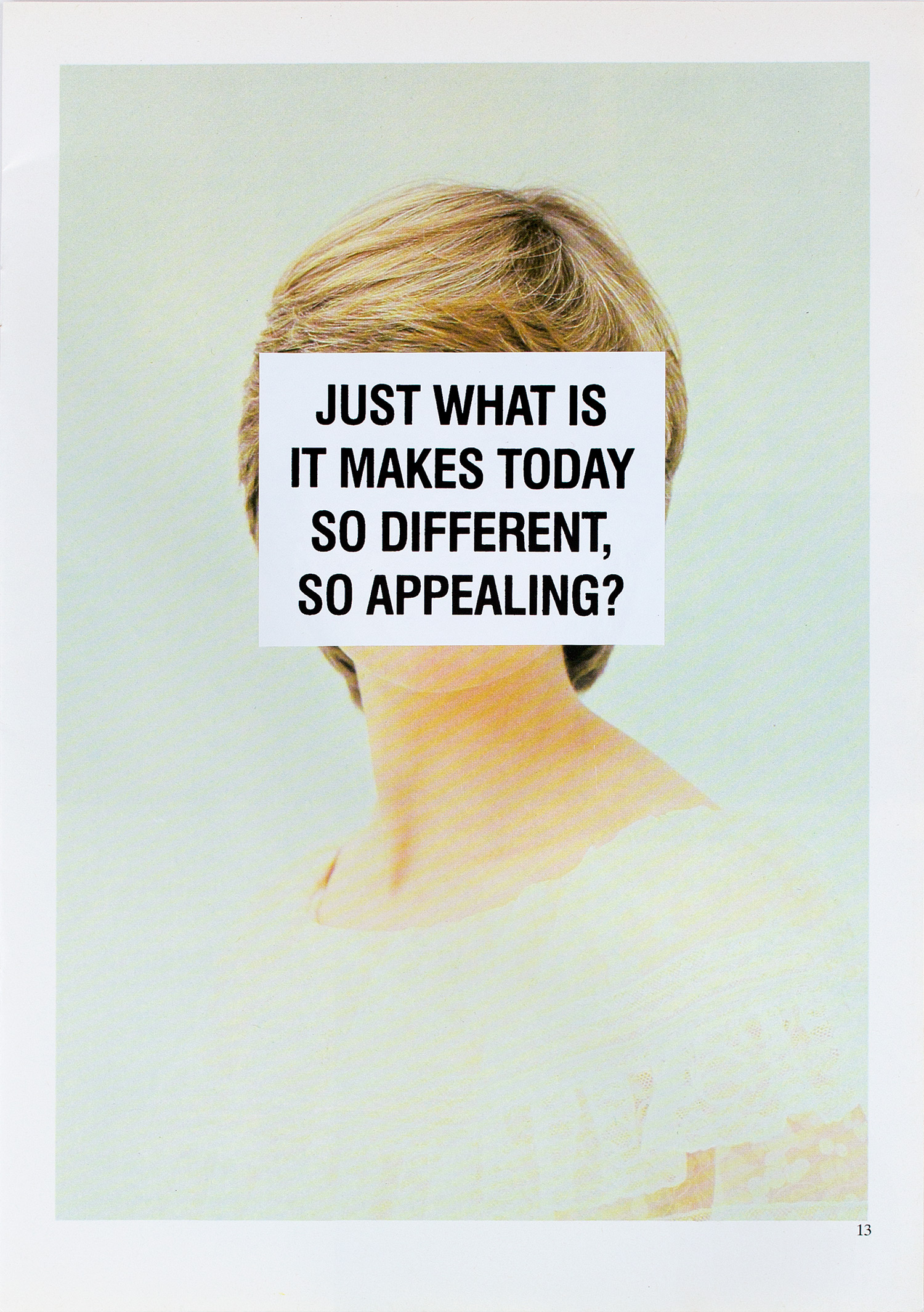 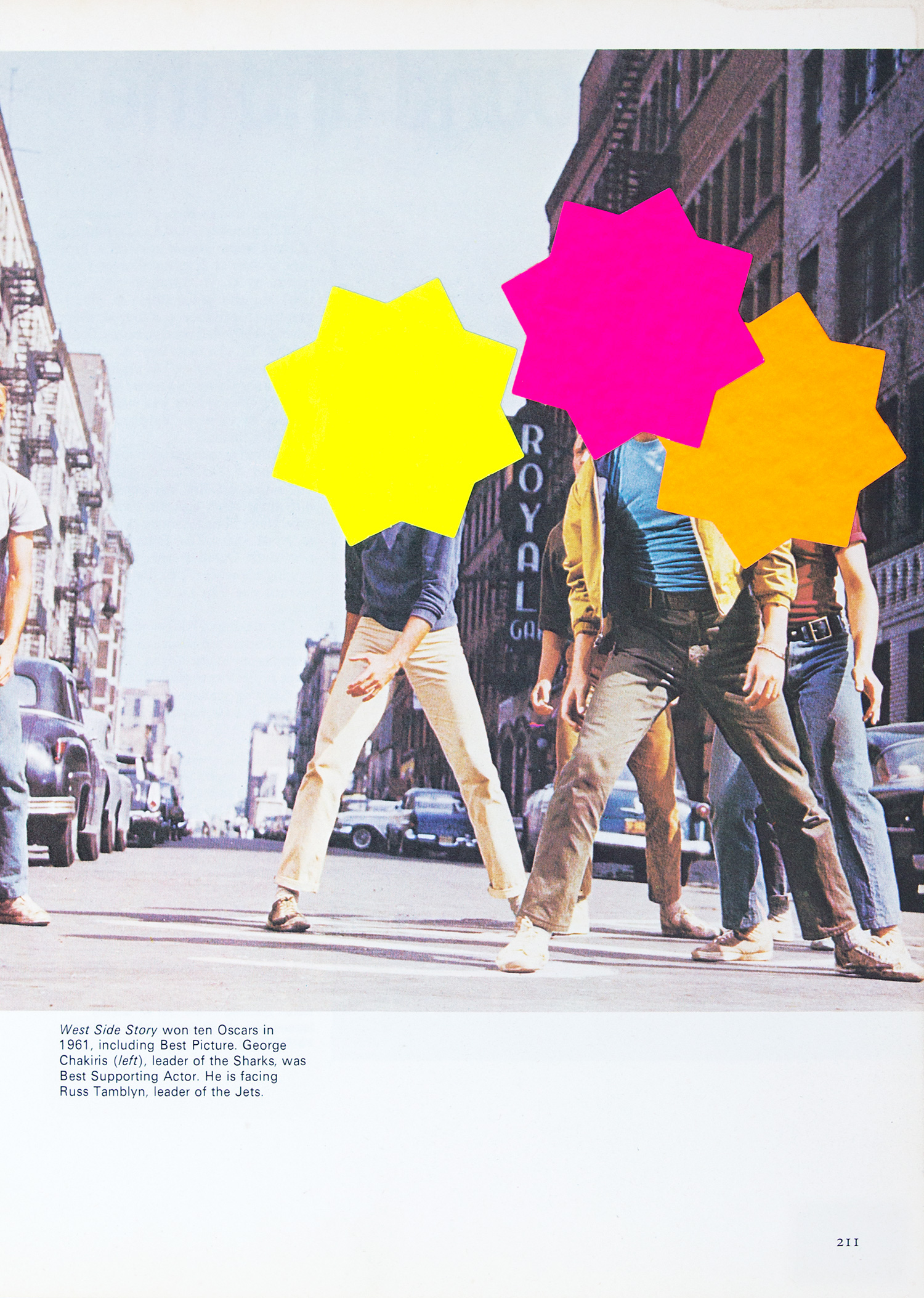 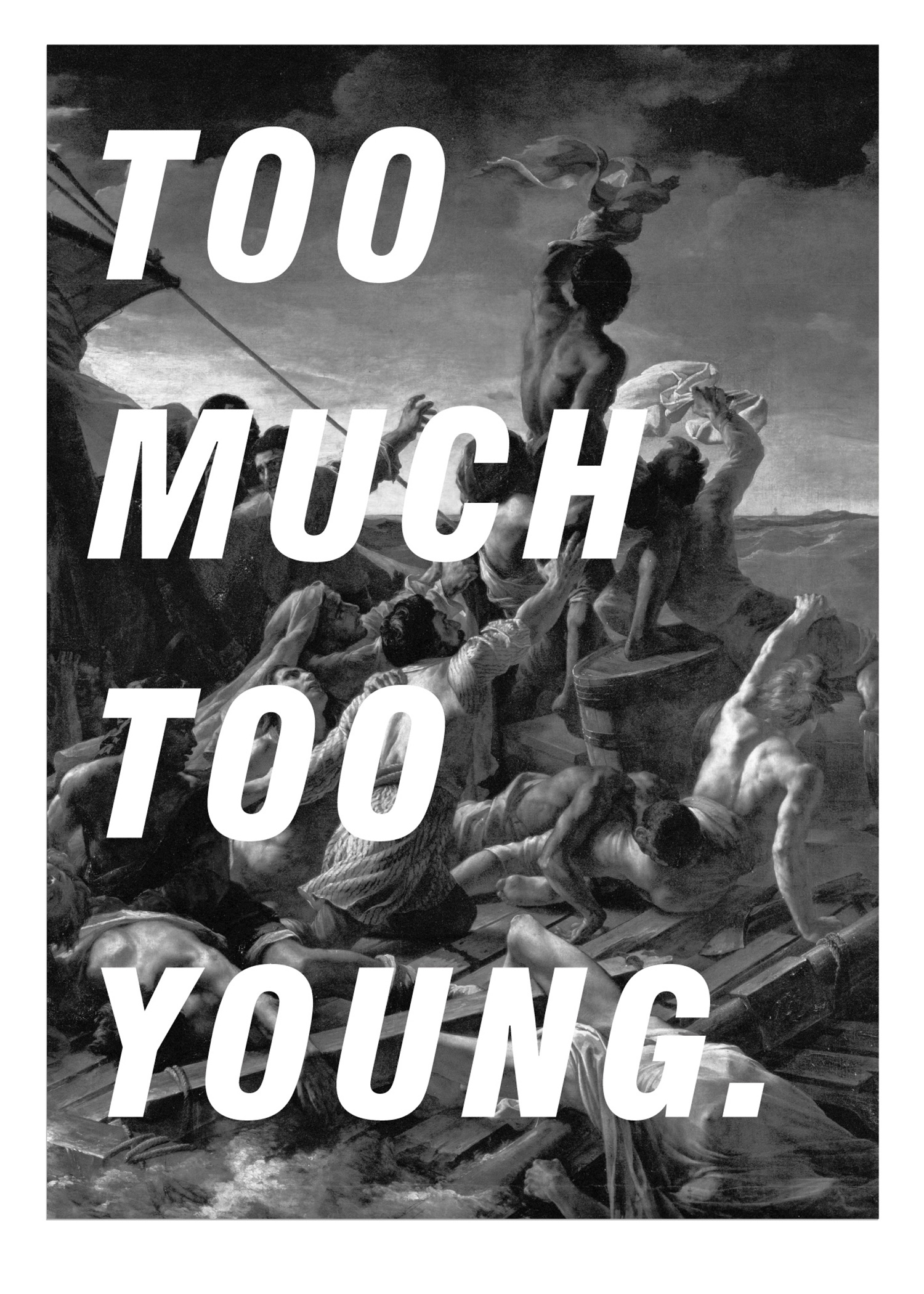 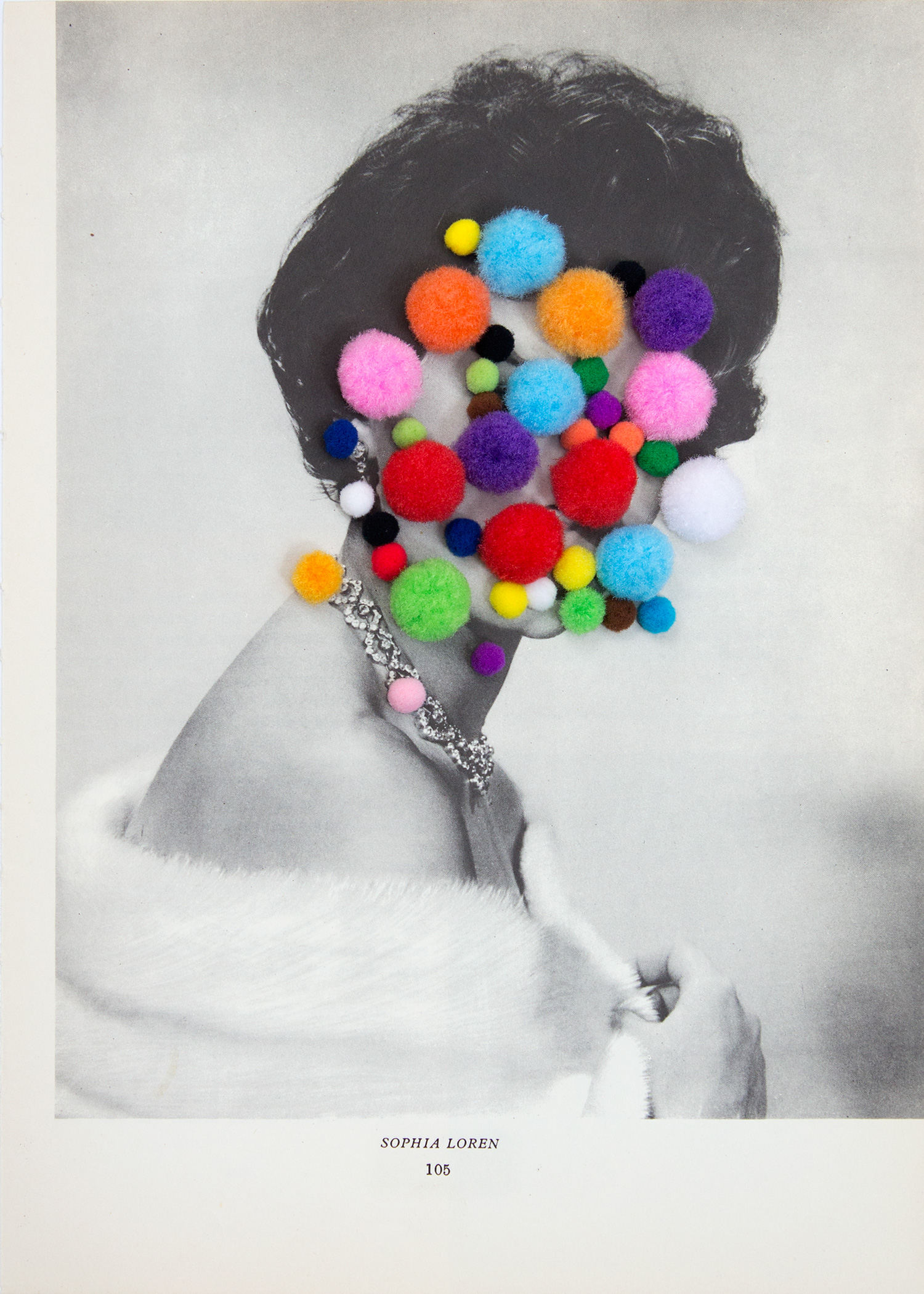 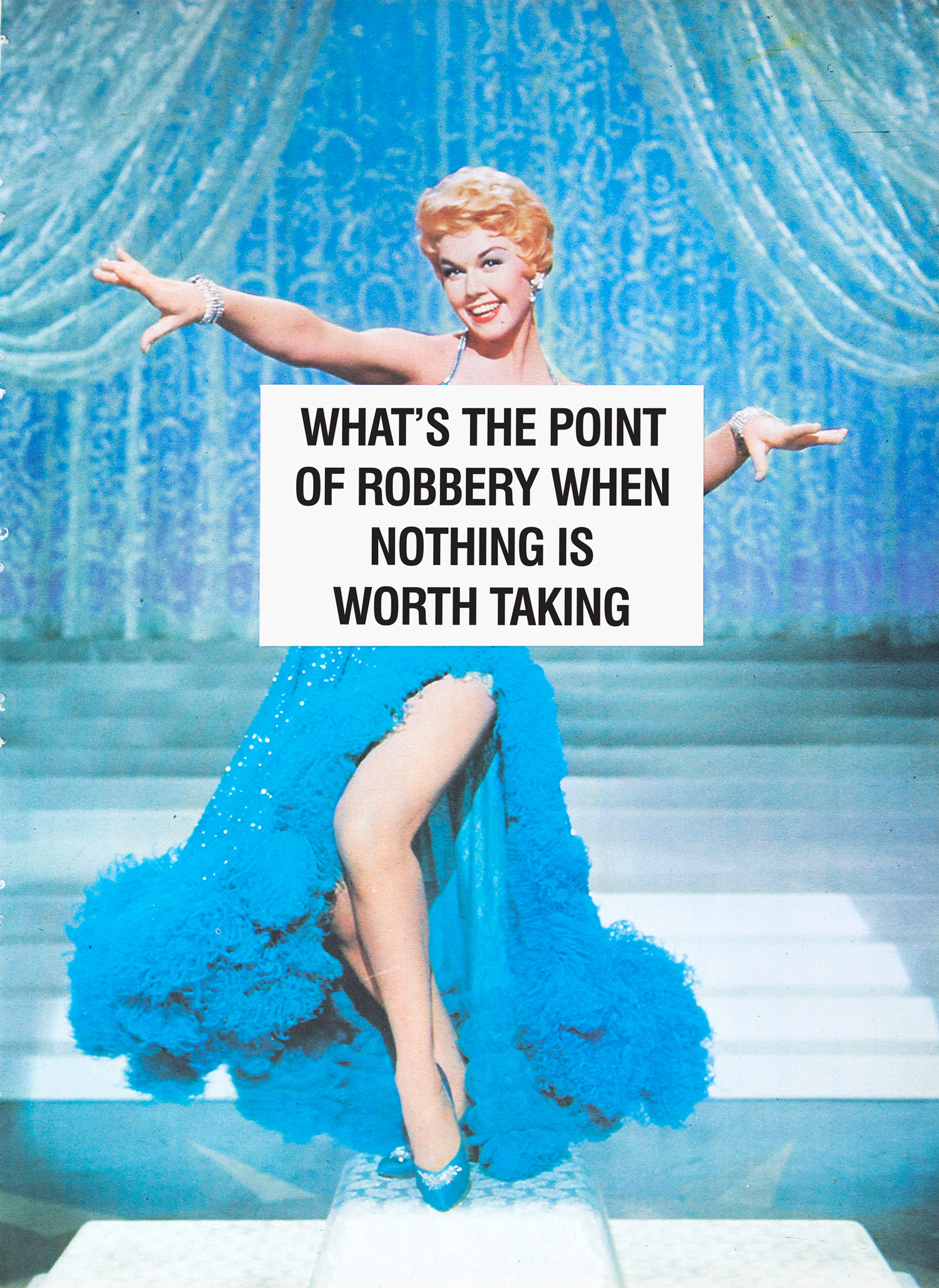 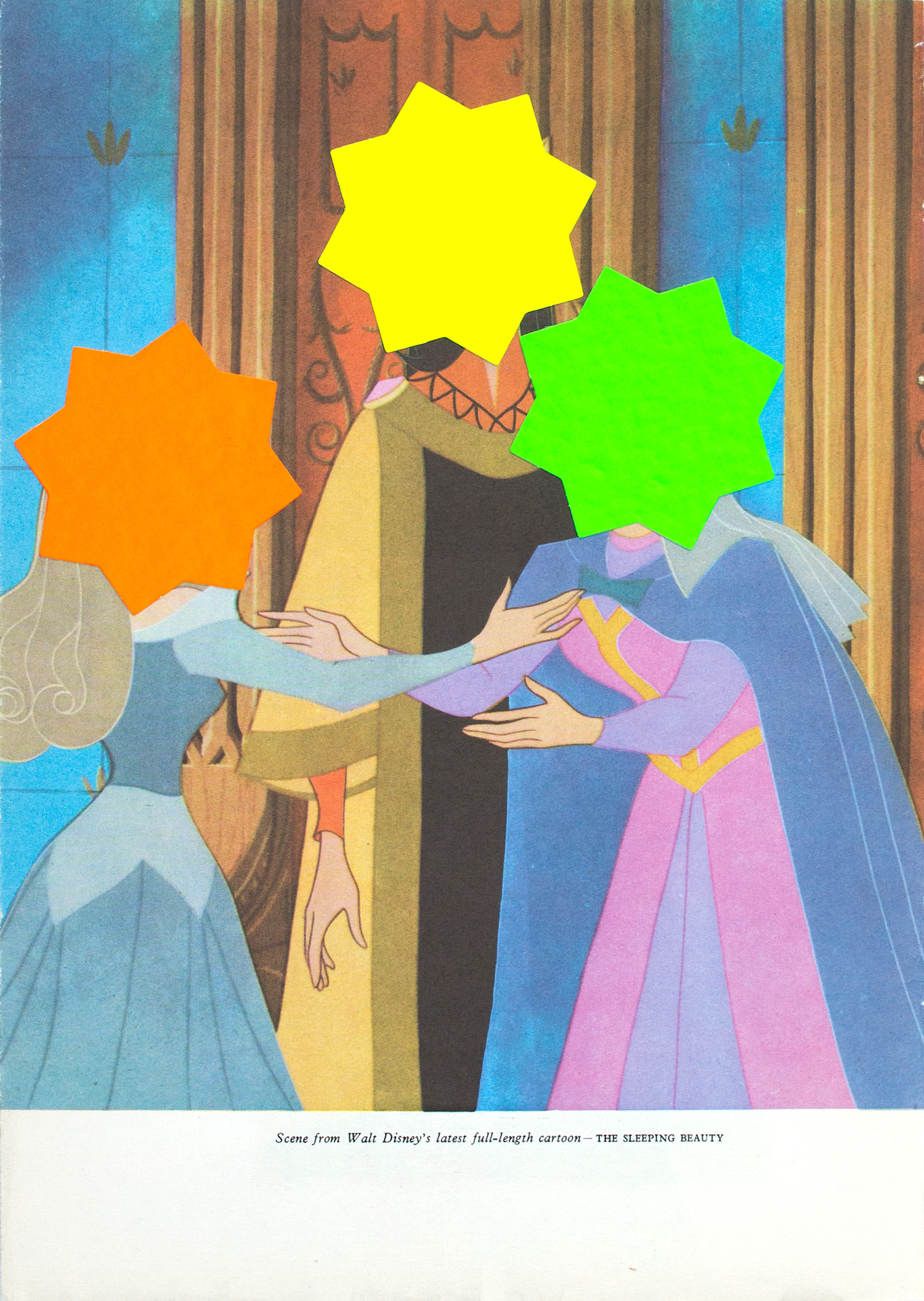 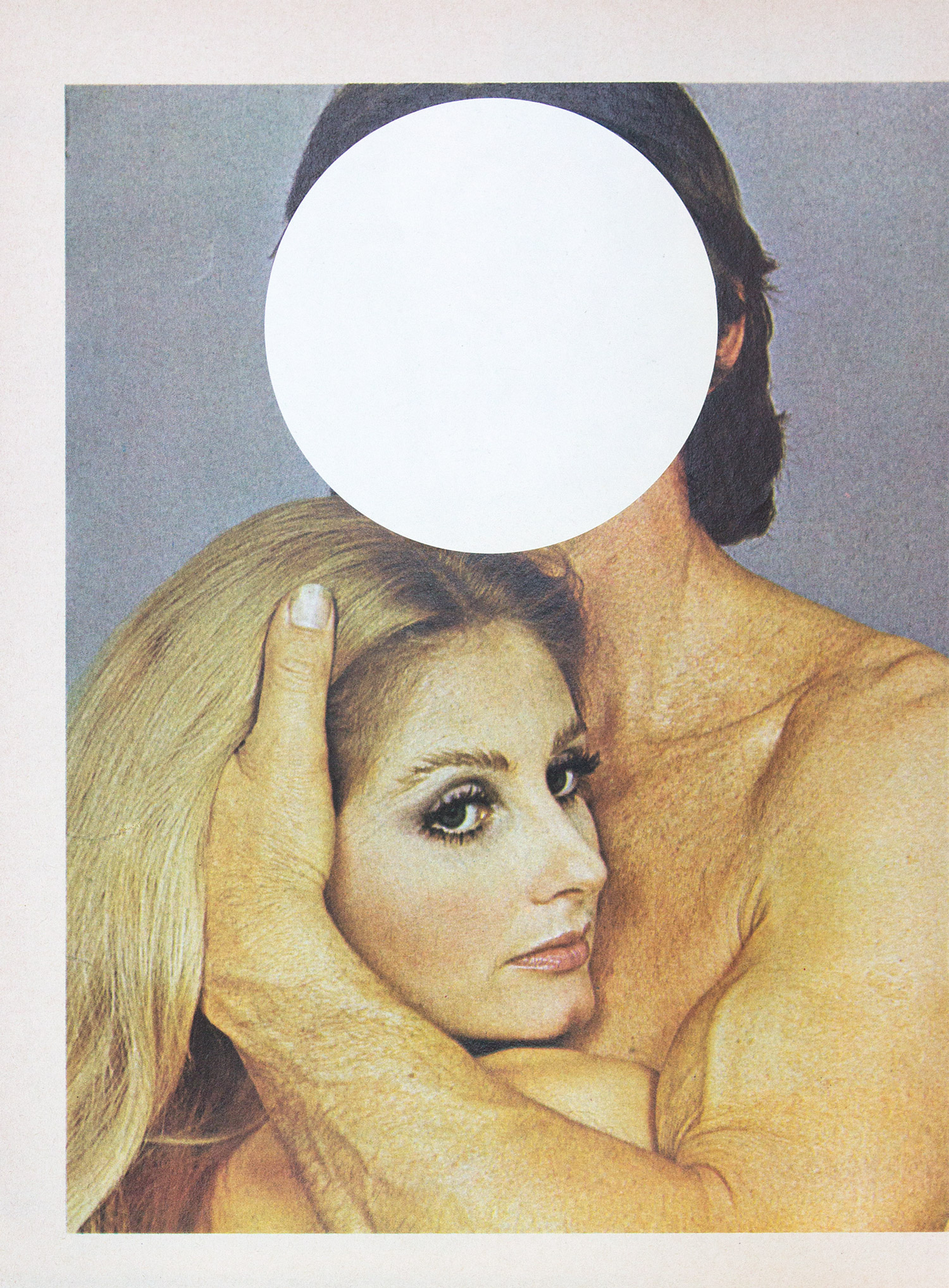 Previous
Sara Hardacre. Now, more than ever, we need art to be political. 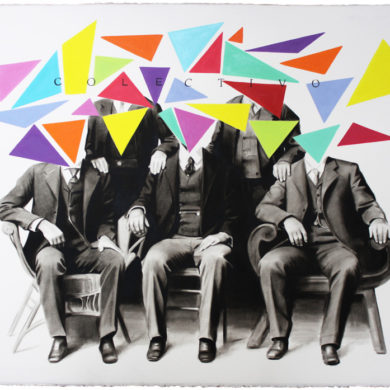