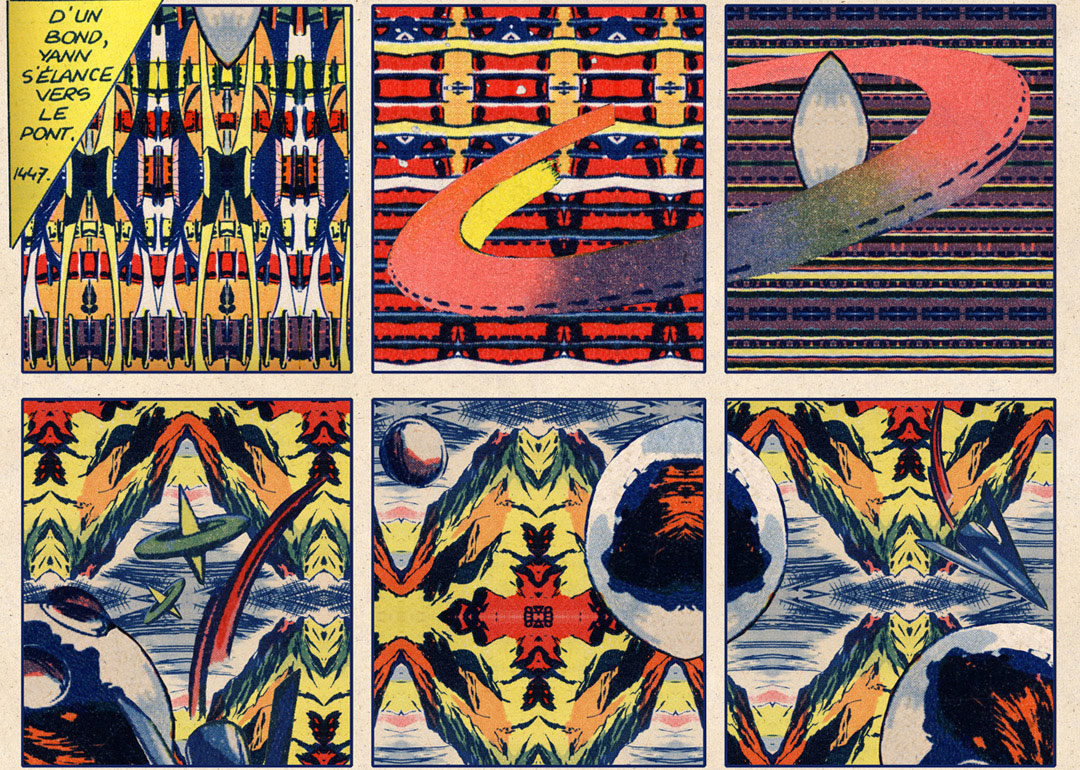 Hi Yvan, please tell us a bit about yourself and your background?

I was born in Brittany France, spent all my life (t)here, except in my twenties during the nineties I stayed in Paris for my short formative years as a student in applied arts and for many years as a full time tourist, movie theater rat, and precarious worker. I never was rich enough to live a decent life in Paris.

Since 2003 I am back as a typical Breton living by the sea, in a place crowded with tourists in the sunny summer and emptied in the rainy winter. Thanks to the Internet I am not totally cut off from the rest of the world now. While my studies should have led me to work in the advertising industry, I never managed to be hired in any agency, even for a non paid internship. At the time I wasn’t good enough to work as an illustrator given the no responses I received from the artistic directors at the newspapers and magazines offices. This desperate professional situation and the parental pressure did not discourage me from doing my personal projects, fanzines and comics.

Around the year 2000, with the rise of the world wide web, I felt like this was a great new way to self publish my comics on a seemingly infinite virtual space, with in mind the utopia of potentially being able to reach anyone on the planet interested in the kind of things I was doing . My ambition was to become a comic strip cartoonist, publishing a new story everyday, which is very difficult especially if you do it from your own initiative, for no money and with a few of your friends as readers. So I went back to the fanzine and graphzine world, between 2005 to 2010.

Then the Samplerman thing happened. All these years my great interest for the visual arts, cinema and comics never faded away nor my tendency to literally immerse myself into a lot of visual material in paper form as well as digitally.

Having being involved in comics (making and reading) for so long, what have you learnt about comics deconstructing them so meticulously?

I have a great admiration for wordless comics, in my opinion the most difficult constraint to tell a story only through a sequence of images.

The use of text is an easier way to keep the reader captive. But if you remove the text, the dialogues, you may obtain a completely different story. I like to find unexpected things inside a panel. This is my way of reading when I am looking for something for my collages, as if I was always distracted. Of course, most of the times I find the same situations depicted in different coded universes: romance, western, science fiction etc.

As I am continuously learning about the history of the industry, the cartoonists, etc I’m able to recognize their style if they’re not credited.

The drawings are telling their own story. I can tell how during the 40’s the style of drawing and coloring was simpler, probably because the cartoonists had to work very fast for a few bucks, how it seems to get more professional and somewhat losing expressive freedom (and violence) during the 50’s. The newspaper comics universe seems different with higher standard in term of quality, especially in the first decades of the Twentieth Century. The stories are more complex at least until the 40’s. The drawings show more detailed work with more personality. I am not a specialist, I was reading European comics when I was a kid and I dived into American popular comic rather lately. I am still learning.

What’s left of comics after tearing down its linear narrative logic as sometimes happen in your work? How would you describe your own narrative?

My narrative can be described as a dream of a story rather than as a story. Or simply like a dream, as everyone has experienced this kind of dream where the events don’t make sense whereas one can recognize some familiar element from the everyday life.

I don’t feel the need to tell a solid story any more, because the human figures and objects picked from several comics already carry a narrative from their own space-temporal continuum. My narrative can be seen like a laboratory experiment where I put together objects, beings and remains from several parallel universes to see what this gathering produces.

I like to play with the common and popular idea of a satisfying or unsatisfying story whether it features all the ingredients the reader is expecting or not. I like working on a page thinking I am just showing a clip of a bigger story I will never tell. I also secretly want to crack the structural code common to all narratives ever told as I tend to think all stories are the same in order to be believable and to keep the reader’s attention until the end. But if I feel it, I will try (and fail) to tell a classical story as part of the experiment around my use of preexisting comics. Even though improvising will make me anxious sometimes, I don’t want to know too much where this is going in order to keep the surprise going.

Your work even though is clearly related with comics, it has elements connecting with other movements as pop, surrealism, psychedelia or even situationism. Which other thing has informed your work as Samplerman?

The most obvious thing would be music. Sometimes I use digital editing tools to make recordings and I enjoy looking at the real time graphic representation of the sound as waves. When my work goes more abstract with a multitude of colors and shapes I try to think in terms of quiet or heavy moments, smooth or hard, full or empty, fast or slow, etc. More or less consciously I try to create a spatial composition as I would make a temporal composition if I were a musician. When my work appears more figurative, I remember how rap musicians have sampled bits of famous hits from the history of recorded music to create textures, backgrounds, wallpapers.

I’ve been listening to a lot of experimental radio programs, and the way the sounds are mixed surely influenced me.

Another influence I would add is folk art («Art Brut» in French, a term invented by Jean Dubuffet) for the creative freedom due to the lack of education or cultural background. The posthumously discovered artist Henry Darger was filling his apocalyptic panoramas partly by tracing figures from pictures out of newspapers, revues etc. approaching at times the style and universe of a wilder Winsor Mc Kay, in my opinion.

I have noticed how on Tumblr, which is massively used by young people, the never-ending flow of images has temporarily disconnected the non credited image from who made it, when it was made, the reason it was made etc. This leaves space to be directly impacted by the images, just before the brain start thinking again. I am watching closely the evolution of randomly generated art, keeping in mind that some of my pieces look like this kind of digitally programmed images, and I am wondering at what point my work will coexist with a robotic production of infinite abstraction.

I like how comics (which is very a difficult thing to define) can encapsulate so many art forms: poetry, cinema, novel, dance, painting, photography, you name it.

Having drawn comics for so long, what led you to collage as a way of creating comics? What do you find in collage appealing and how does it influences your creating process?

Maybe it has to do with self-confidence issues. The relation between the ego and the drawing can become pathological. A drawing is telling so much about the state of mind, the mood, the energy of the moment, the talent or lack of talent for drawing that it feels sometimes painful to look at my own drawings even though I had the greatest time doing them. Making collage unleashes me from having to use my hand to depict a universe. I can still make images without having to dig inside myself and relate only to my inner resources. For a long time, I’ve been downloading many pages of comics from the internet and I have become aware of the concepts of “public domain” and “creative common” advertised by activists and websites like archive.org and wikipedia or the New York Public Librairy’s website. Using forgotten and abandoned art from the past and making something new seemed a great idea. Before thinking about doing collage only, I was already scanning and sampling parts of old comics to put “vintage” textures, add old fashioned printed colors to my comics. It’s satisfying for me to combine the reading and the producing process (the eating and the vomiting as Pakito Bolino from Le Dernier Cri would say) as collages does.

Which is the role of words/text in your work?

Comics is the place where words are drawn, which make them consistent with the rest of the picture. I like to use the physicality of the letters, if I am sampling a voluminous colored group of letters from the title of a story. The name of Will Eisner pops up instantly in my mind as a master at the art of merging a Logo into a drawing in his splash pages from “the Spirit”. I use the shapes of the dialogue, the boxes used for temporal narrative informations (Then…, Meanwhile…The End). All these graphical elements I put in my composition. The text and its content is supposed to work the same way it works in a classical comics as conveyor of informations about the character, the situation, the interactions. But the way I place them out of context unveils a weirdness, a feeling of craziness or even a uselessness which I find funny. I forbid myself to modify the text inside the balloons as much as possible.

I read you work with digital edition tools. What attracts you to working this way? Have you also made hand collage?

I’ve been using these tools everyday since I have purchased my first computer 20 years ago, so they have become familiar. I am not a fan of my dependency to them though. My interest for the 1940’s American comics as a source for my collage has led me to find them already scanned (by benevolent hobbyists) and ready to mess with, which is a blessing, but I could not afford to use the real comic books. Just check out the prohibitive prices on the Heritage Auction website for a copy of “Planet Comics” or “Fantastic Comics”… I have sporadically made some exercises of real collages on pages emptied from their characters, dialogues and actions, I have even shared it during workshops with students. I want to make real collage in the future. I will try to find more affordable comics to make them and I will use the printer machine to multiply the samples. I also want to make drawings based on my collage as I already redraw and recolorize the samples when the definition of the scan is too low. In the end my aim would be to confuse everyone about my technique: Is it a real or digital collage, an original drawing, a redrawing, a copy of a copy? Who cares?