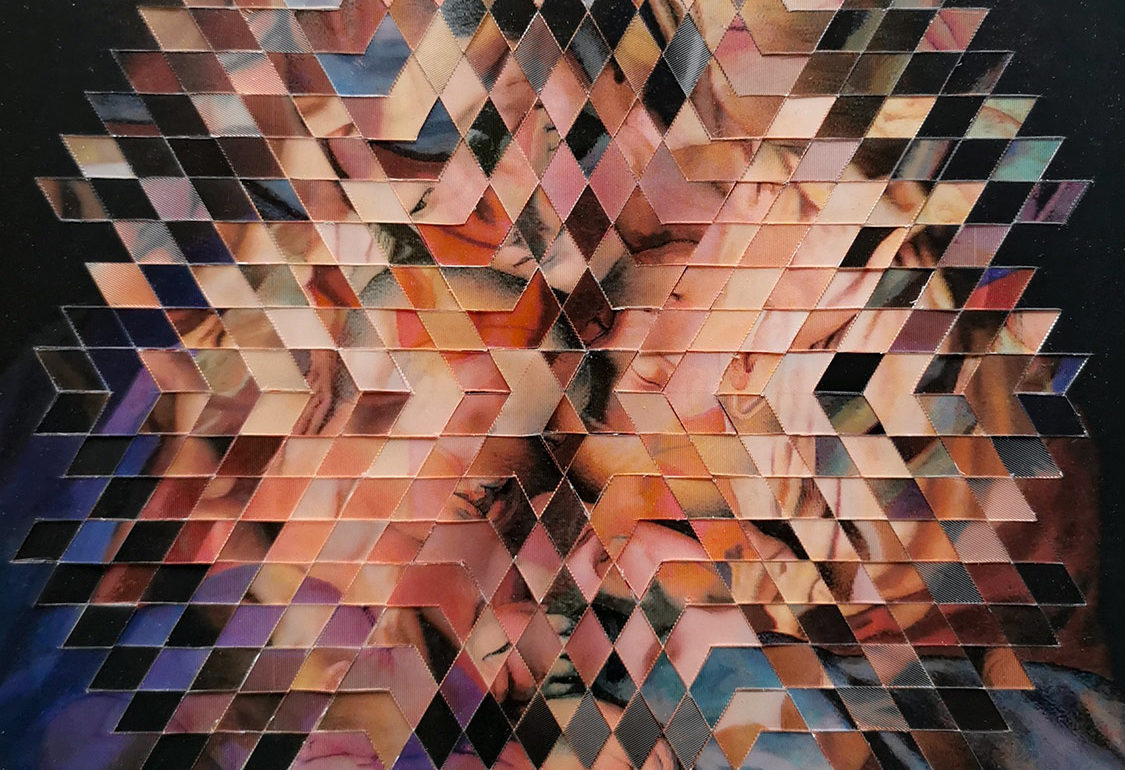 TWS –You’re an art director, photographer and worked for several years in education. How did you start your art practice?

DC –In June 2014, I decided to “make art”. I had lost interest in photography, and I decided to challenge myself by trying to create “artistic works”, that I could consider myself as “art”, of a sufficiently good level that could be seen in some art galleries. My goal was to make things the art scene could be impressed with, the same way I’m looking forward to being impressed when visiting museums and art galleries.
I then developed techniques that allowed me to fill in my lack of practice and knowledge, in order to go quickly and get the desired result. In my head, everything was very clear from the start, so I quickly finalized my first series “Psychedelic Constructivism”, 15 works, my first 15 collages ever, mostly 70x100cm, which were exhibited in the month of October of that year. Everything went very fast after that. Still, collage is barely a small part of my life. I usually dedicate 8 to 10 weeks per year to it, not much more.

TWS –What were you looking for in collage that wasn’t provided by other areas of your creative work?

DC –The collage technique allowed me to go quickly where I wanted to go, and reach the visual impact that I was looking for. I have no artistic background, but I am fortunate to process things quickly in general, avoiding years of trial and error, learning being a rewarding aspect of making art. The downside is the lack of fun in this process. There is no romanticism or well-being in the execution, when only the result counts. Collage therefore allows me to reduce this annoying step, where painting or drawing would require a lot more time and patience, two things that I do not have at all. Also, the idea of “making art” with a goal of entering the contemporary art scene required me to distance myself from computers. Graphic design and photography are languages that I speak fluently, and which in my view no longer have the artistic value that plastic art represents.

– Your work mixes geometry and perfection with chaos and visual overload. Can you talk us about your approach to collage?

DC –”Visual overload” is a very accurate term, that’s what I’m trying to bring to the viewer. “Give a lot to look at”, create a visual impact, give something other than a short positive satisfaction. To inject a maximum of information without creating a visual mess, by inserting thousands of collage pieces, accentuating the radiant, vibrant and vivid effects. On top of that, I incorporate a lot of symbolism and messages in the compositions. Most of the works contain thought-provoking elements, play on dissonance, aim to question the viewer if he or she wants to go beyond the first visual impact. There must be something to say, sometimes it’s very straightforward, sometimes it’s personal stuff, sometimes it’s subtle.

Concerning geometry, this is a personal technical exercise, an additional layer of difficulty that I impose on myself. Not being at all a precise and meticulous person, doing work requiring geometric rigor is a challenge that motivates me, because it is difficult. Here as well, the process is just as painful and constraining, but only the result counts.

TWS –What does psychedelic collage is?

DC –I used the term for my first series, made during a drug weaning period, but also because of the influences of artists I admire. Psychedelia representing the psychological state that is supposed to inspire sensations specific to drug use, creating works that provoke a little bit these sensations without being high was also a technical challenge. As most of my work is very charged, complex and vibrant, it is quickly referred to as psychedelic by those uninitiated in collage, but psychedelic art is a fairly broad group that encompasses work from stunning pieces to the worst horrors of kitsch and bad taste. As with collage, there are very active communities around everything that is called “psychedelic”. I don’t think I am part of this group, but if my work fits into them on its own, then it’s cool.

I’ll be doing an online lecture about collage history and psychedelic collage mid-October.


TWS –You work in the Intarsia series is amazing. It came to my attention that in the description of the artworks you say that is “photocollage”. Is it digital? Is it analog? Is it a mix of both? Can you walk us in the process of creation of that mind-blowing series?

DC –Glad you like the “Intarsia” series, I reached a few milestones with this one.

“Photocollage” is the term I have seen in several art books about collage, I just used that term because it seems the most appropriate, like “acrylic” is a sub-genre of “painting” I guess. A set of pasted photos is a photocollage, to which can be added acrylic, varnish, resin, etc. We could speak of “mixed media”, a not very rewarding term, so in my opinion “photocollage” indicated more precisely what we were talking about when describing the technique of my collage work.

I don’t do digital at all, everything is analog. The initial technical challenge was not only to move away from IT, but also to push the bonding technique as far as possible. Thousands of people think that all I do is Photoshop until they can see the artwork in real. The spectators then value the work done way much more. Seeing this changing perspective is a lot of fun for me.

The “Intarsia” series was my first series after 2 years of semi-hiatus. I wanted to incorporate influences and references specific to folk art and popular art, while adding this geometric complexity. Shortly before I started this new series, I was greeted by a prestigious gallery, which put a lot of pressure on me about the quality of my finishes. So, I spent a few weeks improving myself technically and I made a 20 pieces series presented in November 2019.

TWS –Your series “Electrum” uses images of Gods from different religions and political imagery from the Mao period. What’s the idea behind that series?

DC –”Electrum” is a series that took me a while to actually design. It took almost a full year to collect the source material, but once put together it only took 3 weeks to finalize. A little more than fifty compositions, impossible to fully get other than on video or in real life, because it uses 3D elements require a light play between the work and the viewer. I posted a few videos online in the hope of getting a better understanding of what it was.

This series is indeed composed of images of religious and political icons, whose iconography has always fascinated me. I’m the least spiritual person in the world, therefore the stories and history being the iconography are particularly intriguing from a design perspective.

Individually, these images, by the way they are made, usually look a little cheesy, kitsch, funny, if not downright ridiculous. They often provoke smiles when they are supposed to say something stronger, more serious, spiritual, even fearful. The idea behind this series was to apply complex collage techniques in order to mix them sufficiently enough to make something visually striking.

The use of holograms, lenticulars, reflective materials adds yet another layer of vibrancy to the whole, which becomes a shiny visual mix, pushing the viewer to be drawn to the composition playing on this ultra-radiant aspect.

With this alloy of various religious and political icons, we come to like something undefined, just by its enticing visual aspect, while this mixture nevertheless reduces the value of its individualities in the eyes of purists. By mixing gold and silver, we obtain a metal that shines very brightly but whose real value becomes impossible to define, the alloy removing the purity of its individualities. This alloy of gold and silver is called electrum, a shiny metal whose real value cannot be defined anymore.

TWS –Also this series is part of a virtual exhibition. How do you see art in the post Covid-19 world?

However, I don’t have a defined, let alone positive, vision for the future of art in this post-Covid-19 world. I am afraid that many aspiring artists or emerging talents will decide to give up their hopes of one day ending up in galleries or in the market and will stick to crafts. I have a very conflicting relationship with the mindsets of many artists, their production, their aspirations and their theories. Even more with the world of collage, in which I do not really find myself, although there are a lot of talented artists. I guess I just think very differently, most probably because of my personal background and how I wanted to start making art.

Also, the trend to transform art into “experience” is very real, and if I understand it and see where the fun is, I am not necessarily a big supporter of it. We will undoubtedly see a multiplication of those multimedia experiences, as we have seen for Klimt, Bosch or Van Gogh, flashy multi-screen cinema sessions with sound and special effects. It’s entertainment, reaching out to a much wider audience that consumes art very differently. I am skeptical about the positive impact this will have on art and artists in general. Time will tell.

DC –My own definition is very radical and only includes analog work. Talking about digital collage is nonsense in my opinion, and it is a debate for which I have not come across convincing arguments demonstrating the opposite of what I think, but my opinion is only an opinion among others.I also understand why the collage technique is devalued or considered less noble than classical academic techniques. I fight these ideas of course, but not to the point of making them a personal battle.
What, however, escaped me completely when I started in 2014, are these communities of collagists who support each other, collaborate and develop common activities. These communities are larger than the traditional collectives of artists, it is quite fascinating to discover. My own definition of collage should therefore include this artistic community aspect. To dissociate the technique of bonding from the communities of collagists would be depriving ourselves of an extremely positive aspect specific to this technique.