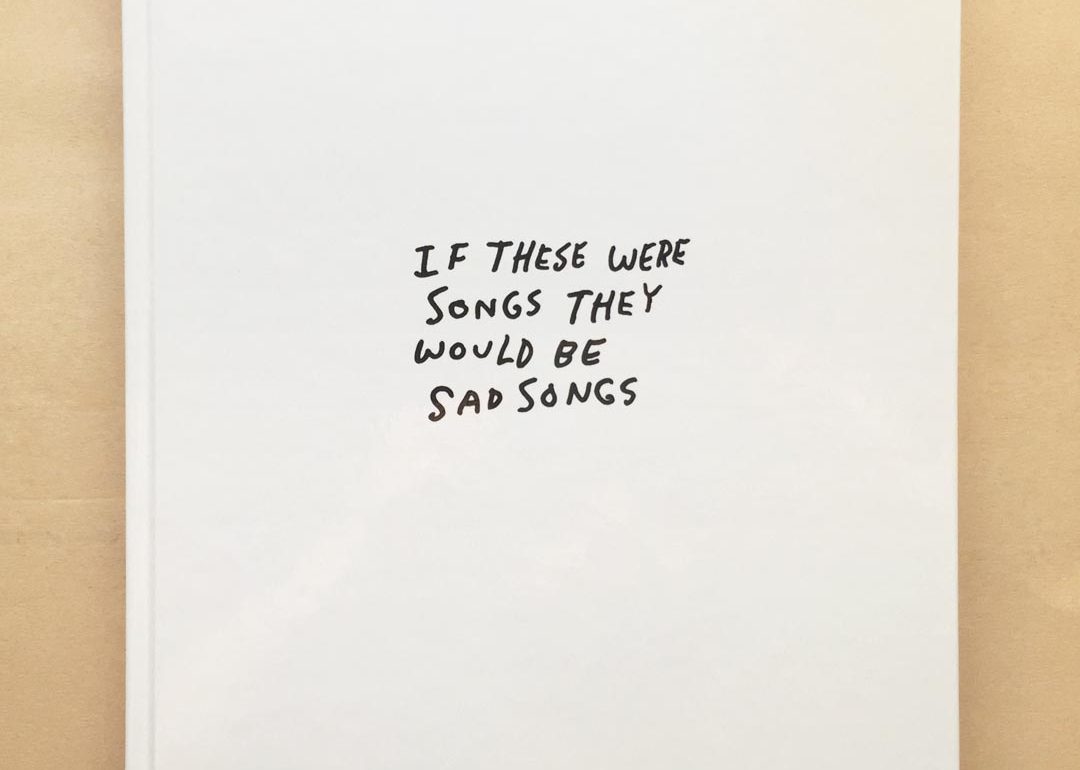 Weird Bookshelf: Erik Foss – If these were songs they would be sad songs

A selection from our personal bookshelf: Erik Foss – If these were songs they would be sad songs | 2017
Published by Colab Projects
Text by Carlo McCormick

“In these pages you will find pieces of my life scattered throughout a story with no particular order, in photos that I’ve taken, and in works that I’ve made”

Pushing through what felt like a sea of endless content I realized there was too much for one book, so I decided to make the book a piece of art itself. It’s more or less a conversational way to show those of you who are not familiar with my work what I do, and to map out a story about my life in a non linear fashion. Being that this is my first book, and I have enough content to make ten, I felt making a game of sorts out of the process was the only logical approach.

There are certain people in my life that have been massively influential, looming large in that group is my father, my relationship with him is really where the book’s title materialized. I learned early lessons in life witnessing my father’s struggles, failures and limitations, and also by defying his assurance that the pursuit of a career in art would be a failure of mine. Hence the sad songs, and there were many.”

Foss documented everything along the way and was always making his own work during this time with over 50 group shows, 6 solo shows, and aquisitions in major museum collections under his belt. His collection of experiences in his photos is a book all in its own.

Erik Foss will create one original work for each donor in their choice of the series of works above, available only here for this special pricing through the campaign end date, retailing over double elsewhere and through galleries. To recognize the contributions of donors to make this project possible, Foss will create a new 8 x 10 inch piece in these bodies of work:

+ Fishnet Paintings: materialized in a dream of a relatively naked woman removing fishnet stockings thrown across the room, landing on canvas in my old studio. After experimenting with the concept for a few months I came up with the conclusion that this series represented aspects of addiction that come along with the disease.

+ Smiley Paintings: this concept came to me in a conversation 10 years ago when I described to a friend how we as youths would get Bic Lighters as hot as possible and press them into our skin – ultimately a poor man’s tattoo or at least our first version. While this act / brand was quite common in the place I grew up, I had never heard of any one burning them into canvas, thus this series follows in my on-going works about my adolescence.

+ Toilet Paper Paintings: this concept was born while scraping dried toilet paper from the public bathroom ceiling within my business, an act that was a common form of vandalism where I grew up. It hit me as I was scraping that ceiling that day, what if I added color and glue to the toilet paper and threw it at canvas it would make beautiful paintings out of what is normally an unlikely medium.

Living and working in NYC is a luxury only afforded by few and to do so Erik Foss has always self funded his projects within his creative community. One of those many endeavors was opening the legendary Lit Lounge and Fuse gallery in 2002.  During its 13 years in business, a generation of creative people darkened Lit’s door step. Through the sheer numbers of artists congregating here, Foss had his pick of talented people to collaborate with and held over 150 art shows at Fuse Gallery. He curated Draw, a massive contemporary drawing exhibition, including works by over 450 artists landing its national museum debut at Museo de la Ciudad de Mexico.  The show toured around the world and the Draw book was distributed internationally by D.A.P. sold in most major museum book stores around the world. (from editor)