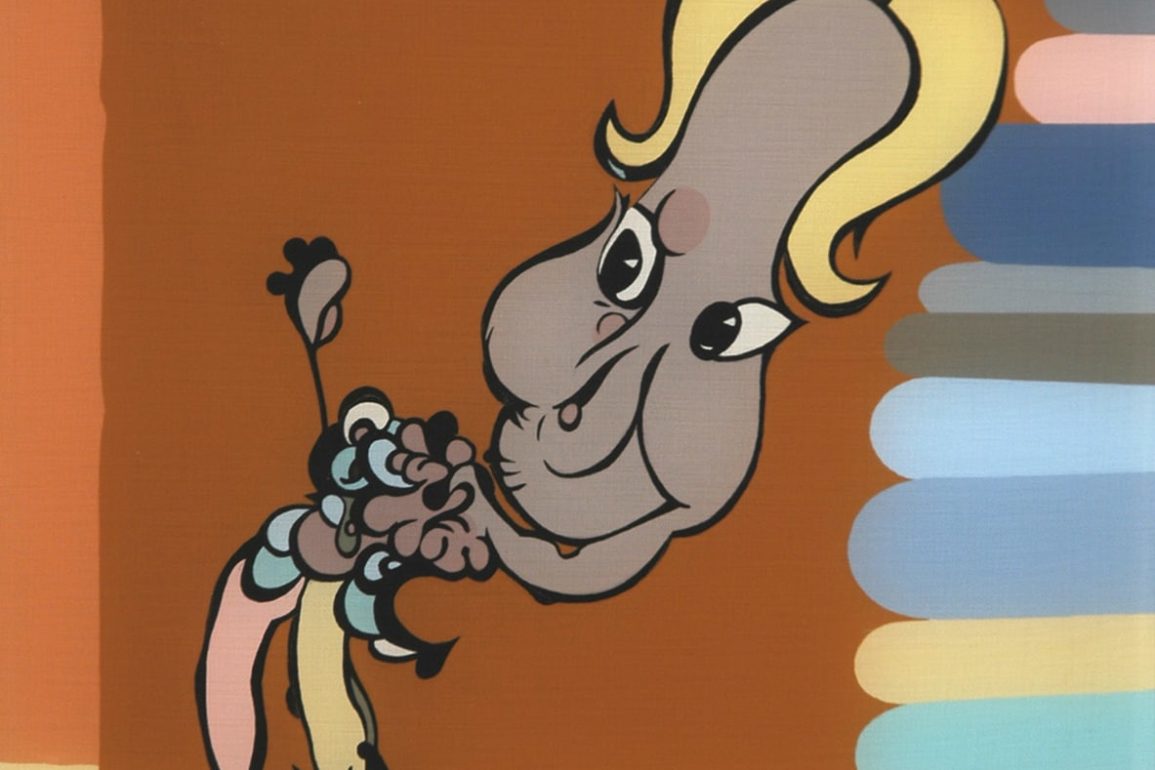 This is the second part of Todd Bartel’s Interviews D. Dominick Lombardi. If you have missed the first one, start reading here.

TB: Your figuration constitutes a noticeable creative license with proportion, distortion, morphing, and multi-planar omissions and additions in both your paintings and your sculptures. The aesthetic rawness of your imagery is difficult to pin down. Sometimes your work champions kitsch, cartoon, and retro-comic sensibility. And sometimes, your work showcases a highly streamlined and futuristic tattoo aesthetic. Particularly in previous decades, the art world was easily fickle if not harsh or indifferent to the kind of work that you made. Whereas now, in our post-Kimo-kawaii (“gross cute”), mixed aesthetic world-culture mashup, your creepy-cute genre-mixing is much more embraced. Initially, what allowed you or what inspired you to fuse lowbrow art with a highbrow art practice?

DDL: I think it is my obsession with keeping myself engaged by making what I personally like to look at. Art is a visual language that can relate on many levels and to a variety of different people’s experiences, so the more avenues an artist utilizes, the greater the possibility to reach new audiences. Perhaps, that is most obvious in both the Reverse Collage series and the Post Apocalyptic Tattoo series.

With the Reverse Collage series, which was in part, inspired by the French Décollage works from the Pop era, I looked at the possibility of the ‘taking away’ of paper or paper pulp instead of adding paper, as a viable collage technique. The series featured a technique of gluing paper to a wood or Plexiglas surface, followed by the removal of portions of the front of the newspaper or magazine pages to reveal the reverse or back of the paper pages, leaving only the ink behind. When I look at the last few works in this series, I see a leaning toward the reverse painting element used initially as the background for the collage. Since the reverse painting approach became as much about ‘piecing things together’ as the collage itself, I eventually switched solely to the clear clean edge I developed in the reverse painting technique for the Post Apocalyptic Tattoo paintings.

The Reverse Collage series also became one of my most political series. Reverse Collage #29, for example, responds to the fact that George Washington had numerous slaves. Reverse Collage #10 addresses the previous injustices in the south, particularly the forced school segregation in Little Rock, Arkansas, and the bombing at Hattie Cotton Elementary School in Nashville, Tennessee. Both events were featured on the centerfold of the New York Daily News on September 11, 1957.

In the Post Apocalyptic Tattoo series, I am addressing some very difficult issues as well — water and air pollution, transgenic food, hot metals, and how that will have devastating effects on all of us. My message was softened by utilizing a mock-comic book style, tattoo art aesthetic, which easily crosses over many cultural backgrounds and age groups. I find that some of the more erudite examples of Contemporary Art can alienate more people than it engages, and for me, that is not a goal. I enjoy that very high and elusive form of expression, but I also know it can turn off many who are not as initiated as those in the more Highbrow, Contemporary Art world — the percentage of people that are engaged in that world is small enough as it is.

The complexity for me comes in the challenge of the fabrication, the assembling of elements and materials, collaging, reverse painting, carving, filing and sanding, mixing self-hardening materials, paint mixing, all those tedious techniques — I’m constantly thinking of how best to employ my craft in a most seamless and professional way. Inevitably, those techniques end up being very time-consuming and sometimes even meditative, which makes the journey all that more enjoyable.

I see it in your work, too, Todd, how intensely and passionately you create, that you are engaged, you are enjoying the process. Otherwise, it would be nearly impossible to do all the amazing things you have accomplished over your long career.

When I think of your work Todd, one rare Reverse Collage comes to mind: #14 — a sort of Constructivist or Suprematist composition — and the only sculpture in the series. What is particularly important to me in this work is how the entire sculpture had to be designed and constructed to be fit together pretty much all at once. It’s sort of the way I imagine 3D chess is different from regular chess — how many more angles there are. #14fits into a category of 3D collage, as much as it does assemblage.

TB: I love that you were compelled to interpret a Reverse Collage in the third dimension. I also appreciate you pointing out the overlapping interest in our studio practices. Indeed! We share a mutual passion for coupling objects and images while responding to materials and processes, and apparently, we have both realized that sometimes the front of something is not enough and we endeavor to engage the backside of a thing! We are both looking forward to the day we might exhibit together — to see our respective work in the same room and see what possibilities might unfold from that encounter!

Speaking of the political in your work, running throughout your career is the imagery of society’s castoffs, the refuse, the seediness of culture, the toxic residue of our waste, and the wake of consumer-driven capitalism. Are you interested in raising lowbrow art to the status of highbrow art as a way of addressing the conditions you witness on the planet? Is that what allows you to champion a stream of consciousness in your work? In your own words, you noted, “For me, my train of thought that relates to my art, like collage, is something like a nonlinear run-on sentence.” Indeed, just thinking about what has been written about your work over the years—see, Lombardi’s World Abecedarius—is like trying to sort through a Proustian, post-apocalyptic mashup of climate science with political facts, “alternate truths,” and psycho-consumerist rhetoric. Marcel Duchamp once quipped, “Well, even nonsense has a right to live.” It seems you would agree! Your work constitutes a great many “isms,” not the least of which is an unmistakable zeal for Neo-Expressionism and Surreal-Pop-infused Dada. As a multi-genre artist, you often depict contradictions, malformations, hideous rubbernecking, the quizzical, and the nonsensical. And, the work also expresses sharpened critical empirical observation. Do you infuse lowbrow art strategy because it allows for a more authentic reflection of our apparent cultural hysteria?

DDL: Yes, that nonlinear run-on sentence that resides in my conscious and subconscious thoughts is key! I get these flashes of images in my head all the time, especially when I’m in the studio. It’s much like collage, how many elements can often be disconnected, especially at first, then somehow, everything comes together in a composition. That process can be very engaging for the artist and the viewer because we can all envision some form of a dream sequence. Addressing and elevating lowbrow gives me a lot more possibilities related to iconography, as there’s no need for me to be high and mighty. I often think of the command of imagery and iconography that Ashley Bickerton has had over the years, addressing endless aspects of culture, universal culture, with such incredible command of all levels of social awareness. Decades before, Frances Picabia did very much the same thing. I embrace that way of thinking, the way they process information and imagery resonates very deeply with me.

Today, we have a definite level of cultural hysteria with all the social media platforms, endless access to everything that everyone does. It’s too much. Much of what would be considered lowbrow imagery is a viable means to decipher and make sense of that hysteria. In Don’t Dream (Vessel Assemblage #7), I used various trading cards on the top of the carousel of revolving eyeglasses to add to the multi-life coarse confusion in that day and time — if I only knew how much more madness was coming down the pike.

TB: While preparing for this interview, I read the extensive collection of reviews found on Dominick’s website and could not help but collect some of the wild things people have said about his work. To obtain a different kind of picture of the person here is a critically acclaimed portrait—a collection of words and phrases used by critics, editors, directors, and curators who have described D. Dominick Lombardi’s work:

A warning of the pain of a world gone mad

Complete buffet for the eyes

Detritus of a capitalist consumer society recycled out of necessity to create a monstrous, hybrid new figure

Duality of nature and nurture

Familiar icons are warped beyond recognition

Fluctuating duality between good and evil

Fresh look at a timeless story

Futuristic blobs with eyes and nose

Gives significance to the insignificant

Humanity has survived through the evolution and mechanization

Imperialism is the culprit

Incongruous components are forced together

Jumble of events that get reported on a normal day

Obnoxious little scamp posing beatifically with a “Who, me?”

Resembles us, yet we cannot completely identify

Sex and desire, race and gender, and celebrity, media, and commerce

This is part 2 of 3. More coming soon. Go here to read part 1.
Learn more about D. Dominick Lombardi in his website or instagram