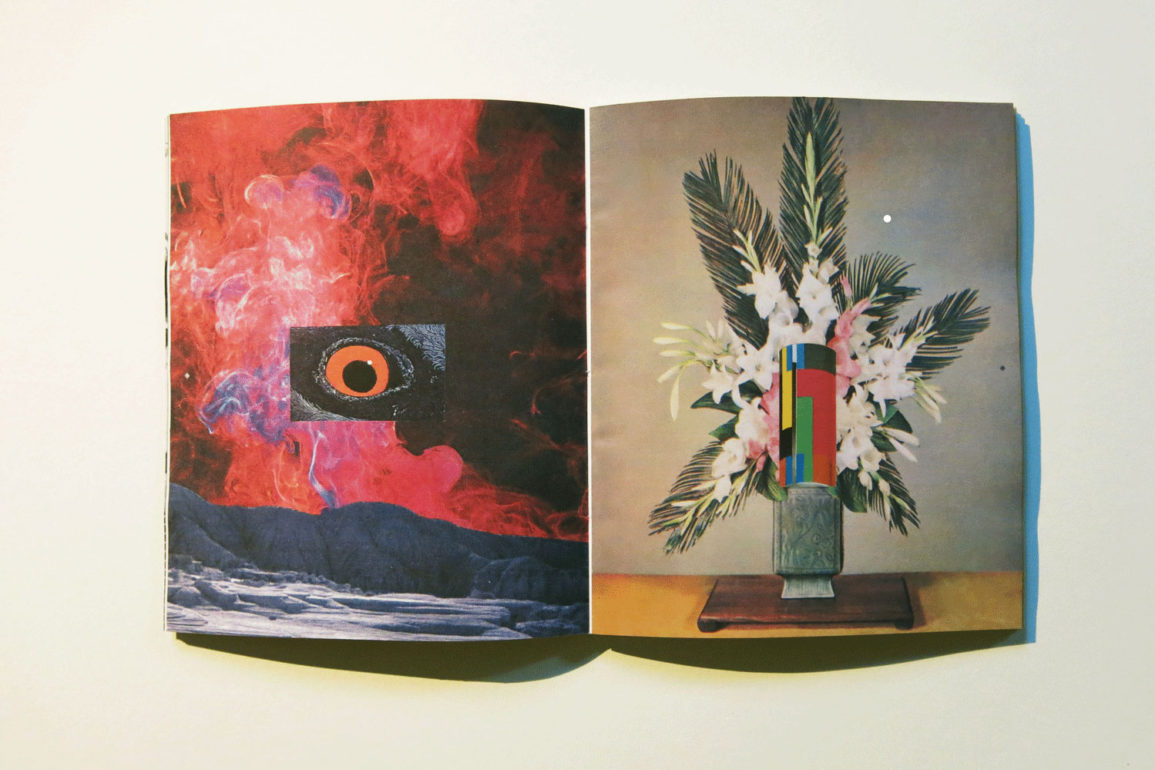 Mékanik Copulaire is one of the active online and print projects dealing with contemporary collage. We spoke with its editor and curator, french artist Bill Noir, to learn about his vision and ideas behind MC and about his own art work.

– Can you define Mékanik Copulaire (MC) as an editorial / curatorial project?

I choose both definitions. Editorial because I printed more than thirty editions since 2010 (between 100 and 300 copies each); and curatorial because, fatally, I am a bit the filter of what I want to share of my vision of contemporary collage.

– Which is MC´s curatorial identity?How has it evolved over the years since the project´s beginning?

At the beginning, after two years that I had started with collage myself , I launched a call for contributions for the paper édition «Mékanik copulaire#0» (on myspace at the time. . . ). In this first fanzine, I hardly made any selection, mainly because I didn’t receive many proposals and also because my collage culture was still fragile.
Then submissions raised in the following calls (60/80 artists) and I forced myself to choose about thirty collagists per issue.

This formula lasted until the fourth edition included. Then I evolved the format to present about fifteen people, four of whom had ten pages, in order to give a little more detail to their respective worlds.
From that moment on, I only went through direct invitations, while remaining open to the messages that I could continue to receive.

In parallel I also edited other more personal projects around collections of found images (occiput), self-publications (chaomos, des astres, éclats, imago,. . . ) and some collections of artists and photographers.
For the past two years, I have been sharing more images on Instagram. This virtual gallery allows me to share more directly and widely the works to which I am sensitive in contemporary collage, and also to make «brand pages» for the #10.

I see Mekanik Copular as a platform on which I am the ferryman.
I don’t know if there is any particular identity to it. I hope so. . . .

–  Which is your criteria to select an artist to publish? Do you select work / artists to be published on-line and off-line with the same criteria? Does the non-permanent nature of on-line publishing gives you more freedom or allows you to take more risks than in the printed matter?

I am especially attracted by analog collage, because I have been playing this activity for ten years. I know how constraints offer more vivid, wobbly, fragile, raw solutions and shows creations that are more plastic than graphic.
To select, I drift through blogs, hashtags, community’s web, and let myself be surprised in an intuitive way.

My criteria is supported by my attraction for the non-narrative, rather chaotic compositions, vibrant textures, a form, the place of emptiness in the space of the page, sometimes a visual punch that I receive at first glance.
What also continues to surprise me is the ability that this technique offers in possible singularities.
After a certain period of personal investment, as an illustrator or a painter, the collagist sculpts his own line. The writings are multiple and I try to share as many neophites as experts, or as many women as men. Whether online or in print, what I’m trying to share is my fascination with it. It is also a purely selfish act of collecting, namely, to establish my own archives 🙂

– Which is the value MC gives to printed paper today? Why MC publishes on paper too?

«Mékanik copular», the printed magazine, started in march 2010. It was with Tumblr, sometime after that, that I started sharing on online social networks. Those media do not have the same history or purpose. They evolve in a complementary way. Print offers the possibilities of an object, the manipulation, the exchange, the ability to offer, to find, to re-find, to have it in you hands, or under the eyes during a more calm time.
The other, internet, has a value of sharing, topicality, promotion, virality, «hashtagtittude», networking… but a support that, when you think about it, has its own limits and where everyone shakes their arms in the air like a castaway on a desert island. Many boats pass nearby, but only pass by, sometimes saying hello from afar.
I’m rambling. . . . . Paper is not dead!

– How do you divide your work as an artist and as an editor / curator?

More than division, I will say connection. Extending my curiosity to other «writings» than mine has really opened me to other horizons of research and allowed me to know better my place in the collage community, which I think is very curious about the work of others.
It is interesting to think that we are all a little bit the fruit of a certain collage, that our creations can be partly influenced (in a positive and sometimes unconscious way), be reappropriations, overtakings, new fascinations sources of renewed stimulation.
In short, to get to know each other better through others.
I have also sometimes met other collagists, during trips, at the corner of a flea market, workshops, collectives shows and it is each time the opportunity for amazing discussions and exchanges, where we confront our differences and convergences.

– After being such a revolutionary media in the 20th century, how do you feel collage has evolved in the 21st century?

The revolutionary act you are quoting was born just a century ago thanks to the German Dadaists and was due to the technical developments that made it possible to transcribe photography onto many distribution media.
This young century-old photomontage has not lost so much capacity to give meaning and especially to be able to play with it, to divert!

I think that during the 20th century its influence was huge, but for me the 21st is not so disconnected. We are confronted with the same contradictions, we are drowned in images and the world of zapping that constantly recycles old methods, and our attics are full of old books and magazines. . .
It reminds me of Philip K. Dick’s book «Ubik».
Collage remains a perfect tool for thinking, acting, playing, classifying, denouncing and transmitting poetic visions that distract us from certain dictates of thought.

– Do you feel collage’s current popularity is pushing the media into contemporary art? Or is it moving it to the level of a hobby?

It is not easy to define the boundary between collage hobby and collage that is close to contemporary art.
Especially since it is not always necessary to have gone through an art school or it is often even harder to integrate into networks of galleries or so-called «professionals».
I’m still in the blur myself, but I try to do only images because I feel like I belong through this practice ( collections, collages, pinhole photography, fanzines, sometimes commissions,. . . )

Sometimes I wonder if our productions are aimed at others.
They are a kind of bridge, of course, but they are more at the service of a self-construction, a pretext to spend the day, to invent a social posture that will allow us to create some links, to feed our curiosity, to be «amateur» in the first sense of the word, who has a taste for what he does or what he search for.

Some people around me talk to me about their practices (dancing, cinema, writing,. . . ) and because they know my work, make me think that they are also in one way or another in the approach to collage.
I think that’s fair.
Who is not?

Previous
Negativland. No Other Possibility (1989) VHS