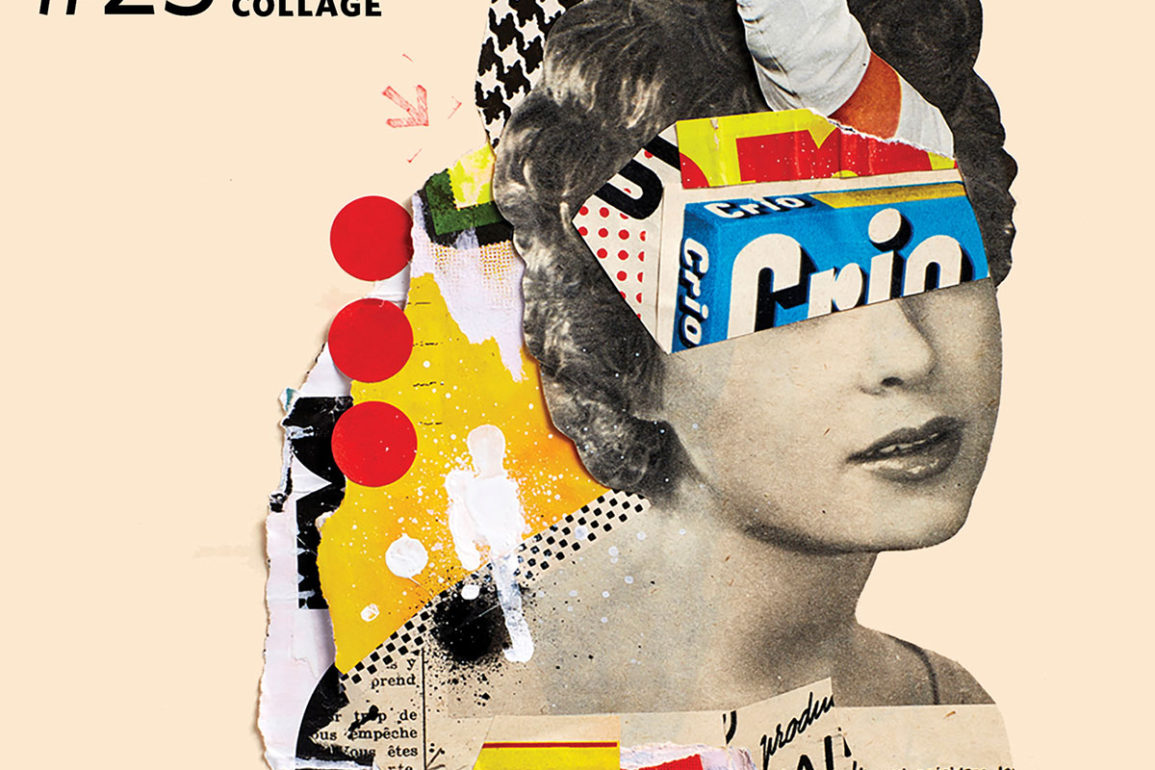 Ric Kasini Kadour, artist and co-founder of Kolaj Magazine, the one and only art magazine focused on collage.

Kolaj magazine has been documenting contemporary collage since it´s first issue, published 2011. We asked Ric Kasini Kadour about his views on art, collage and contemporary culture.

How did your obsession with collage start?

That’s a funny question, because I don’t think that I have an obsession with collage. In my work, I have always been concerned with society’s relationship to art and how the canon is shaped in such a way that it excludes all sorts of artists and practices. Kolaj Magazine started as a collaboration between me and Benoit Depelteau, who was an artist in a gallery I had in Montreal. I wanted Benoit, a brilliant collage artist, to take on a big project and he suggested a collage book. Being someone who likes to kick things up a level, I suggested a magazine. This was 2011 and we both felt collage was underrepresented and poorly understood in the larger art world. Benoit served as editor for the first ten issues and when he left to pursue other projects, I stepped into the role.

In Kolaj #2, I wrote about how Alejandro Otero used collage to bring Modernism to Venezuela. That remains one of my favorite stories, because it is about how collage can bring about new ways of thinking and open doors for people. I fell in love with the medium writing that article and have been trying to be the best champion I can be for it ever since.

What’s your definition of collage? Which idea/approach of collage you champion through Kolaj?

I try not to define collage in the same way that I try not to define art. With Kolaj Magazine, we think of collage as a medium, a genre, a way of thinking, and a community. The medium part is pretty straight forward–cut paper fragments and glue–but I would also include in that category the host of closely related activities: assemblage, decoupage, and photomontage. And I would go so far as to consider all mixed media works related to collage. Lately, I’ve been thinking about what it means if we include quilting in that category and how doing so opens up the canon to women and people of color. Genre gets a little funkier, but this includes painting, for example, that is drawing in multiple visual languages, like when a painter places graffiti writing in a realist landscape or when hard edge is playing with lyrical abstraction in a piece. Collage thinking is when two ideas are put together to create a new one. And collage community is this global collection of artists who are meeting, making, connecting, and sharing collage. By conceptualizing collage in this way, we keep Kolaj magazine fresh and open to a lot of possibilities.

On your website, you mention that you’re interested in the role collage plays in contemporary visual culture. After all this time editing Kolaj, what are your thoughts on this issue?

A few things. I mentioned collage thinking before. The tech industry in Silicon Valley, for example, is deeply engaged in a type of collage thinking when they come up with ideas that are things like “Tinder but for restaurants” or that terrible “Yelp for People” that they tried to do a few years ago. The 21st century is all about mashup culture, meaning it’s all about making something new out of existing ideas. That is collage.

Speaking more precisely about visual culture, I am impressed with the number of publications that are using collage to illustrate concepts, articles, and ideas. I see a lot of collage in Axios and Harpers, for example but also The New York Times, Washington Post, and other news outlets. And of course, the music industry has had a love affair with collage for ever: from punk zines to a whole host of album covers, collage keeps coming up.

It doesn’t and there are two reasons for that. First, in its most basic form, collage is an intimate medium. Because it relies often on source material from publishing, the works themselves are small. If the end game for a contemporary artist (and the litany of gallerists, curators, and collectors cheering them on) is a museum show, most collage artists are not producing the large, gestural work that museums look for to make a statement on their oversized walls. Some artists are, but they are still outliers in the medium as a whole. William Davies King argues that the book, not the gallery wall, is the optimal place for collage and I am starting to agree with him and think through what the implications of that are…but that’s beyond the scope of your question.

The second, and bigger reason, I think collage has trouble in the art world is that it is poorly understood. I can’t tell you how many world-class museum curators produce lazy group shows of collage, call them “Cut and Paste”, and throw them out in the world as if they are covering the topic somehow. One would never do a painting exhibition called “Paint and Canvas”, but for some reason, collage isn’t given the deeper critical inspection that other mediums are afforded. The art world continues to be painting-centric and what that means is that all other media are related back to painting. For example, Jim Chamberlain’s sculptures are often referred to as abstract expressionism. Photographs are discussed in terms of their painterly qualities and compositions. Art movements are defined by what is happening in the discourse around painting. In my work, I try to apply a collage-centric approach to art and art history. The first thing I ask of art is, Is this collage? If not, how may collage have informed this piece? And then I work back from there. And I am constantly surprised how just below the surface, when you dig into a painter’s work, you find collage lurking somewhere in their practice. But when you ask about an artist’s history with collage (and I did this recently with the estate of Sam Francis, who used collage in a number of his paintings) the response you get is often, Huh, we never thought of that? You get a similar response when you ask museums what collage is in their collection or on view. Part of what makes Kolaj Magazine so much fun is that we get to tell this story about art history that very few people are paying attention to.

How do you feel collage is regarded in contemporary art?

I don’t mean to be all negative. When Art Basel kicked off a series of art fairs focusing on art on paper, they called out collage specifically. And curators with an eye on African American art and art history are doing a remarkable job of writing about collage. And frankly, when I meet people and talk about collage, they often tell me how the medium speaks to them. They get excited about it.

After being so revolutionary in the 20th century, how do you feel collage evolved in this new century?

From the workshops of the Dutch Renaissance to the manifesto-driven cliques of Modernism, throughout art history, communities have always been the driving force behind arts evolution. The story of art movements could be told by recalling who knew whom, how they met, how they fought with each other, and how they egged each other on. The internet has allowed collage artists to connect with one another. Because we think of ourselves as underdogs, we eschew some of the pretentiousness one finds in the art world. Collage artists are some of the friendliest, most supportive, open groups of artists I’ve ever met. We are organized and working like never before to re-write the canon of art history and take art back to the people. And collage artists are getting smarter and figuring out ways to make work that functions in existing systems while staying true to its core. I am thinking of the number of artists working in immersive installations or in large scale or creating public art using collage. This is not only good for the medium, it is good for art’s relationship to the rest of society.

Last year, you organized Kolaj Fest in New Orleans and this year you are returning. How was the experience? Which conclusions did you gather after meeting so many people interested in collage?

It’s kind of hard to describe, but I will try. It was like Lou Reed’s “A Perfect Day” and Van Morrison’s “Into the Mystic” had a collage baby with Lionel Richie’s “All Night Long” in the swamp. If you love collage and spend a lot of time thinking, speaking, and writing about it, it was an amazing experience to do it live, in real time, with some of the smartest, nicest people you’ve ever met. People would ask questions or share stories that just blew my mind. And watching people come together and support one another, like really care about each other and their art work, that was an amazing thing to watch and be part of. Kolaj Fest was beyond my expectations.

What impressed me the most about Kolaj Fest was has happened since the event. People not only stayed in touch and maintained long lasting relationships, they started supporting, exhibiting, writing, and being a champion of each other’s work. This is what a community does. You look after each other. You lift each other up. That is how we are going to make a difference in the future.