In Variations #2,  the second episode of Jon Leidecker curated series about collage and music commissioned by Radio Web Macba, the author focuses on the sixties, a decade where finally collage in sound caught up with collage in visual arts.

“If music initially hesitated to follow the lead of the visual arts in the field of collage, it made up for lost time in the sixties. Breakthroughs in high fidelity sound, an influx of consumer level tape recorders, and the continued influence of television building the notion of the Global Village were among the factors that led to an explosion in collage based composition. The most obvious of the shared qualities in these pieces was a tendency towards the use of World music, culled from as many disparate locations as possible. If the new availability of ethnological recordings from around the world had shattered the notion that music was a universal language, musical collage can be seen as an instant response to the rest of the world as it became unignorable – a way to explore things held in common and the potential for hybrid identities.” 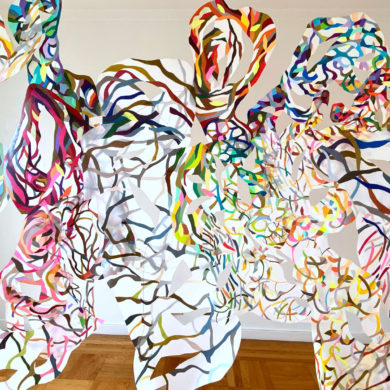 The lock down chronicles:
Holly Wong